Making his Weston debut in the first Seagulls away fixture of the season at Hungerford, the latest loan signing by the club, Archie Collins, has joined the Seagulls from Exeter for an initial period of 2 months. 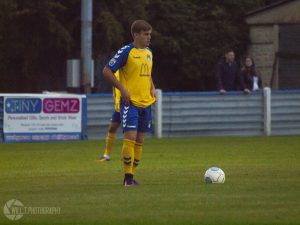 Collins can be described as being in the similar mould of current Seagull Jake Mawford, having the ability to play up front, off the shoulder of the main striker, right wing, left wing or in central midfield. He penned his first professional contract in April after training with Exeter’s first-team, and the 17 year-old joins comes to the Woodspring on loan after representing Exeter at U18, U21 and Reserve team level.

“I am very pleased to be on loan at Weston” said Archie when asked about the move, “this club has a great bunch of footballers as well as an understanding staff. This will give me a experience and a platform from which I can progress my footballing career.”

Rob Boyd, assistant coach, added, “Archie is a good footballer, his style suits the type of football Macca is looking to play. He is brave on the ball and will hopefully open opposition teams up and create a few chances for us.”