Avery’s contract runs until the end of the current season, with a club option for the 2020/21 season

The defender has played alongside Mike Symons and Chris Knowles before at Gloucester, while manager Scott Bartlett has coached him during a trial at Forest Green Rovers, when Bartlett was first-team coach at The New Lawn.

Sam will be available for next Tuesday’s visit to Gosport Borough.

We are delighted to be able to bring Sam to Weston. He is a player I know well and will be another excellent addition to our squad.
He has good experience, is a combative defender, comfortable in possession and a good character.
Sam’s arrival comes at a good time for us. With Jacob (Cane) returning to Hereford, it gives us the option to play Chris (Knowles) in midfield if we see fit.
We have 19 league games left, it’s good to have the option of another experienced player within our club.

The imposing defender progressed through the Gloucester City youth academy and departed for Witney & District League Two side Chipping Norton FC during the 2005-2006 season, in search of senior football.

He then signed for Southern League Division One Midlands team Bishops Cleeve in the summer of 2006, and went on to make 95 appearances and score two goals for them.

He left for Witney & District Premier club Carterton Town midway through the 2008-2009 season. 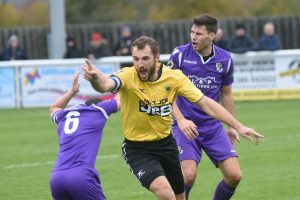 However, Avery was soon back with Southern League South & West side Bishops Cleeve, rejoining them for the start of the 2009-2010 campaign, playing 93 times and scoring one goal over the next two seasons.

In the summer of 2011, Avery had a trial with National League side Forest Green Rovers, however was unsuccessful and eventually returned to Bishops Cleeve that same summer.

He continued to perform at a consistent rate for the Southern League side over the next two seasons, and was snapped up by Southern League South & West team Shortwood United in the summer of 2013, going on to appear 52 times and score two goals for them.

In May 2014, Avery returned full circle and went back to his first club, National League North side Gloucester, and became a regular at the heart of their defence as well as wearing the armband for the last 18 months with the Tigers, making over 230 appearances for them and scoring 13 goals before departing in January 2020.

We would like to welcome Sam to the club, and wish him all the best with the Seagulls.