Weston-super-Mare have landed the exciting signing of French midfielder Mohamed Chemlal on a loan deal until the end of the season. 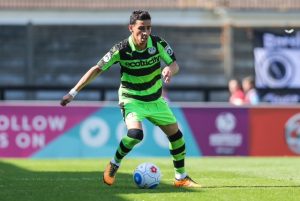 A former international throughout the French national youth set-up, Chemlal came through the famed Le Havre Academy that has developed the likes of Dimitri Payet and Lassana Diarra in recent years.

In his time in the French national set-up he lined up alongside a number of notable names including the likes of Manchester United star Anthony Martial.

He is a lively and quick attacker who likes to run at defences. He has one goal to his name for Forest Green this season having signed for the Gloucestershire club in the Summer after a spell on the books at Stoke City.

Head Coach Scott Bartlett was thrilled to announce the capture of Chemlal saying: “He is an excellent player who is very creative and I’m looking forward to working with him at Weston-super-Mare AFC.”