Kaid Mohamed is a Welsh professional footballer who has recently played for Kettering Town on non contract terms. He plays as a winger and was previously with National League club Eastleigh.

He spent the early part of his career in Welsh football with Ely Rangers, Cwmbrân Town, Llanelli, and Carmarthen Town and in recent seasons has played for Swindon Town, Forest Green Rovers, Torquay Utd, Newport County and Bath City among others.

Scott has signed Kaid on contract for the remainder of this season with an option to extend this for a further 12 months. The contract and registration was rushed through to the FA and League this morning. Richard Sloane was talking about longer term contracts on the Geoff Twentyman show last week. 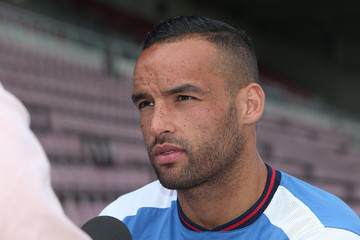 Kaid said he was delighted to be working once again with Scott and was relishing the chance to play for the Club in the National League.

Scott said of the signing ’Kaid is someone I know well having played with him for Bath City and I am delighted to be able to bring him to the club. He will add a lot to our squad and has bags of experience which is an area we identified as needing to improve. Kaid can play anywhere in the front three so gives us lots of options going forward, and will be in the squad for today.’