Centre back Matt Bower’s loan has been extended from Cheltenham Town until January 1st 2019, with left back George Nurse extending his loan from Bristol City until the same date.

Bower made his debut at home to Oxford City in the 1 – 1 draw at the end of August and has gone on to make six starts in a Weston shirt so far, partnering Weston regulars Jake Lee and Jason Pope at the centre of defence so far. The left footed defender has performed well so far, his 6’7″ frame making sure that he rarely loses out in any aerial duels and has helped him play a part against the physicality of future National League South defenders. Matt has also scored one goal, coming in Saturday’s FA Cup 2 – 2 draw at home to Salisbury FC.

George Nurse has put in consistent performances during the season, making nine appearances and scoring one goal, a rasping drive in the 2 – 3 defeat to St Albans. His pace and skill down the left flank mark Nurse out as a dangerous threat down the wing, and mixed with his defensive ability, he has settled into life well at the Woodspring. 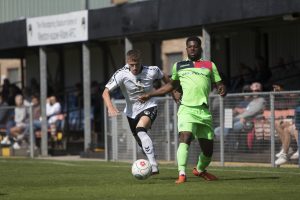 We’re delighted that both players will stay with Weston until the new year.