Weston-super-Mare are delighted to announce that defender Matthew Bower has joined the club from Cheltenham Town on loan for the next month. 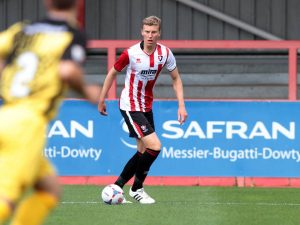 Bower is a 6’7″, 19 year-old centre-back on loan from Cheltenham Town, having been a product of their academy since 2010. He made his Cheltenham debut at the age of 17, appearing as a substitute in a 2-2 draw with Oxford City in the FA Trophy, before starting in the replay during January 2016. Between March and April 2016, the defender appeared 10 times at Cirencester Town in the Southern League Premier Division. During 2017-2018, Bower turned out five times for his boyhood club, his league debut coming in August as a substitute in a 3-0 defeat away to Carlisle United. Bower featured in a game for Stoke City U23s last September, hosted at the Woodspring Stadium, and has penned an extra year onto his Cheltenham contract in February 2018.

When asked about the capture of Bower on loan, First Team manager Marc McGregor said “We are pleased to have secured Matt for a month as recently we’ve had several injuries in the defensive area. Matt will not only on bring a presence being 6ft 7 but he’s also good with his feet which is important to how we play. He comes in as Aaron Parsons will have to have an operation which will see him out for 10/12 weeks and with Jake Lee being suspended we had to act fast and it was good of Cheltenham to give us a player that has Football League experience. He will go straight into the squad for Saturday”

Watch Bower and the rest of the squad for as little as £1 on Saturday 1st September at the Woodspring Stadium on our Community Open Day!