Weston-super-Mare A.F.C are delighted to announce the return of fan favourite, forward Bradley Ash, on loan from Boreham Wood until January.

Ash is a product of Weston’s academy, and made his debut under Craig Laird in the 2013-2014 season, then still a 17 year-old. Having become more of a regular under Mickey Bell and Ryan Northmore, Ash hit form during the 2015-2016 season, scoring 14 goals in as many starts, and he moved on to Barnsley in the January 2016 transfer window. 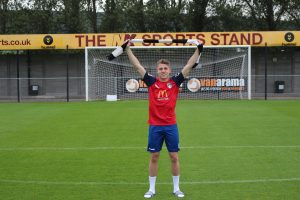 Please note the shorts in this image are not the away kit’s shorts. Images courtesy of @liambyrnemedia

While at Barnsley, the young striker went into the side’s U23 squad and scored a hat-trick for them against Leeds United U23s shortly after arriving at Oakwell. In September 2016, Ash found himself loaned out to the Seagulls in the final week of Ryan Northmore’s tenure. Ash became a pivotal part of the Seagulls side during the 2016-2017 season under new Weston boss Scott Bartlett as Weston’s figurehead of the attack, and he continued to score goals throughout the season as Weston stayed up and progressed through to the Somerset Premier Cup final.

In 2017-2018, Ash went out on loan to National League side Boreham Wood however suffered an ACL injury during pre-season, which inevitably ruled him out for the entire season. Once back to full fitness, Ash was released by Barnsley following their relegation to League One and he was snapped up by Luke Garrard’s Boreham Wood on a permanent deal. So far during competitive games for Boreham Wood, Ash has started once, appeared as a substitute three times and been an unused substitute five times. He also came off the bench to play against Premier League sides Crystal Palace and Arsenal during preseason.

Across his two spells with the Seagulls so far, Ash has played 112 times and scored 39 times in competitive outings at the Woodspring Stadium. 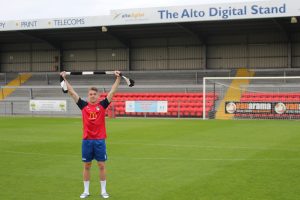 First team head coach Marc McGregor said ”We’re pleased to have Brad back. It bolsters our attack line, he’s someone who knows the club and agrees with what we’re trying to achieve. We’re really excited to have him. We’ll be looking to add more strength in depth over the coming weeks. I think Brad signing will be a good little lift to the lads before the game on Saturday”.

To see Brad in action with the rest of the team, come down to the Woodspring to watch Weston-super-Mare A.F.C vs Hemel Hempstead on 15th September.