Weston-super-Mare A.F.C are pleased to announce that Alex Byrne and Louis McGrory have both signed on the dotted line ahead of Weston’s opening league fixture away to Wealdstone, with both youngsters having previous National League experience.

Alex Byrne, just like current Seagull regulars Jason Pope and Jacob Cane, progressed through the Exeter City academy and was given a role within the Grecians first-team for the 2015-2016 season. However, in preparation for league football, Byrne was loaned out to the Woodspring Stadium, alongside Popey, in the summer of 2015, and he made 33 appearances before suffering a nasty ankle injury in Weston’s loss to Maidstone United at the Woodspring, ruling the youngster out for the rest of the season.

Byrne made his competitive Exeter debut in a 1 – 2 loss to Hartlepool, in the Sky Bet League Two in August 2016. Byrne made another first-team appearance that season, and enjoyed a one-month loan to Truro City in February 2017, where he made three appearances for the Cornish club.

In 2017-2018, Byrne was a part of Exeter’s first team squad, but made only two appearances, a 1 – 2 loss to Charlton Athletic in the EFL Cup, and an appearance as a late substitute in a 2 – 0 win over Grimsby Town, before being released by Paul Tisdale from St James’ Park at the end of the 17-18 season.

Byrne is a 21 year-old central midfielder who is capable of passing short or long, but has mainly been used by Marc McGregor as a left-back throughout pre-season, while Byrne was on trial at the club. 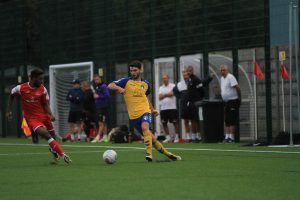 McGrory started out with the Swindon Town academy, but upon his release from the Wiltshire club at the age of 16, he was snapped up by Scott Bartlett for Forest Green Rovers’ academy sides. The youngster progressed through the academy, and signed a professional deal at The New Lawn in 2015.

McGrory spent time on loan with Southern League Evesham United in the 2015-2016 campaign, as well as ending the season at Aldershot Town on a one-month loan having joined FGR’s then-league rivals in March 2016. In September 2016, McGrory joined Bobby Wilkinson’s Hungerford Town on a one-month loan, and then went out to Evesham United again two months later on another one-month loan. To end his succession of loan spells, the midfielder headed to Gloucester City, then of the National League North, in March 2017, where he ended the season, before being released by FGR that summer.

McGrory spent the summer of 2017 on trial at Newport County, but wasn’t offered a contract by the Football League club and instead joined AFC Telford United of the National League North at the end of August. However, he struggled to get regular game time at The New Bucks Head across the 2017-2018 season.

McGrory is, primarily a holding midfielder but has been known to be used on the right side of a midfield four, and was used by Marc McGregor as a stand-in right-back during the back end of pre-season. 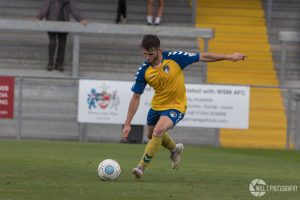 I’m very happy to be back, the lads and staff have been great and I’m positive we’ll have a good season. It all starts this Saturday, I’m looking forward to it and hopefully we start in the right direction.

For me I’m really happy to sign for Weston. It’s a great club and I’m really excited because I feel we will achieve big things this season. One thing that attracted me to the club is the way the gaffer has got us playing football and controlling games and for me that suits my game.

We’re really pleased and the one thing to come out of this is that it’s not been easy to get them over the line. They’re too really experienced players, one that’s been at a league club and had plenty of offers and one that’s also been at a league club but bounced around the Conference North and had a potential opportunity to go into another club.

One thing that I will say is that the club have been superb over this because they’ve gone the extra mile to make sure that I could get both of them in, because at one point it was looking likely that we could only get one in and the club have worked really hard and helped me to get these over the line.