An unsuspecting Bob Flaskett was presented with a bottle of wine and a speech outlining the gratitude felt towards him from club secretary Richard Sloane as a gesture to remind him just how much the work he carries out at the ground, endeavouring to ensure that games are not only played, but that they are played on what has been commented upon as one of the best pitches in the league. 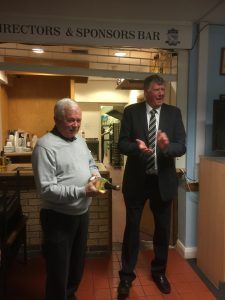 Whilst the geography and location of the Woodspring stadium may, on occasion, conspire against us, Bob works tirelessly to keep the pitch in a playable condition.

Club secretary, Richard Sloane,  told a boardroom of club officials and the Concord fixture matchday sponsors, “As a club we are indebted to Bob. His efforts and diligence in the work he does here at the club is often above and beyond the call of duty. On behalf of everybody associated with Weston AFC we want Bob to know that the work he puts in out there is fantastic and very much appreciated.”

The work that goes in to maintaining the pitch speaks for itself with Yeovil Ladies and Bristol City U23s choosing to play fixtures at the Woodspring stadium. The next Bristol City U23 FC match will see their development squad facing Barnsley FC U23,  with he fixture to be played on Monday 9th April with the KO at 1pm.