The club can now announce that Scott Bartlett has completed the signing of talented left-back Danny Greenslade following his release by League 1 side Bristol Rovers.
Sought after Greenslade is widely regarded as one of the best left-backs in non league football and has opted to commit his future to the Seagulls after enjoying a successful loan period with the club last season.

Danny made his debut for the club in the Somerset Premier Cup 3-0 win against Bath City at the Woodspring Stadium, before his league debut saw him feature in the 2-0 win at Hampton and Richmond Borough.
He went on to make 18 appearances for Weston-super-Mare AFC last season, capping a fine run of form by scoring in the final league game of the season in a dominant 5-0 win away at Hemel Hempstead. 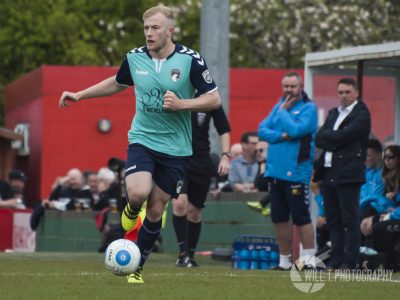 Head coach Bartlett commented on the signing “We are delighted Danny has committed to the club. In all honesty he had lots of options and could have doubled his money elsewhere but knows he is in the right place to develop.
He was one of the best left-backs in the league last season and will no doubt move back, in time, into professional football where money and long contracts will follow.
“In addition to being a very good player, Danny has endeared himself to the rest of the squad and also the fans, that was important for him and us during negotiations.”

Greenslade, 21, said “I am really excited to sign. I’m sure we are going to have a successful season. I have a good relationship with the Gaffer, the Management, and the players.“We have some brilliant players here, it is a very professional set up and will give me every opportunity to do well and progress my career. I enjoyed last season, the fans were great and I cannot wait to get going for this coming season.”