The club can announce that terms have been agreed with Forest Green Rovers FC for the transfer of Dayle Grubb, for an undisclosed sum, subject to a medical on January 1st, 2018. In the meantime however, ‘Grubby’ remains a Seagulls player. 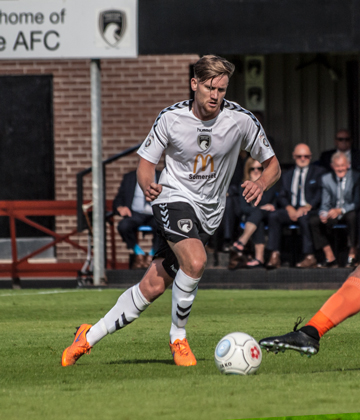 Grubby tears another defence apart at the Woodspring. ©Will.T.Photography

Dayle has been a part of the club since he first signed with the academy at 16 years old in 2007. Staying with the club and moving to the first team, Grubby made his debut appearance for them in December 2008 under manager Tony Ricketts. Since then Grubby has gone on to make 256 full appearances to date in league matches, combined with coming off the bench a total of 58 times, giving him a total of 315 league appearances for the Seagulls. Coupled with also making 33 Cup competition starts, along with nine sub appearances, he has also made a total 42 cup appearances for Weston.

Overall he has featured in a total of 356 matches and has scored a total of 90 goals. To date, this ranks him as second highest, behind Harry Thomas, who made an incredible 710 appearances, with respect to the total number of appearances for the club. His time at the Woodspring Stadium has seen him play under a number of managers, Tony Ricketts, Andy Gurney, Craig Laird, Mikey Bell, Ryan Northmore, Scott Bartlett, and most recently Mark McGregor.

A great record overall to have scored a goal in every 3.99 matches that he has appeared in, and scoring his first hat-trick, along with an extra one for luck, against Bishops Stortford in the 2016/17 fixture at the Woodspring Stadium. That particular tally contributed significantly to not only helping Weston secure safety for following season but also in sending Bishops Stortford down for the following campaign, a season in which Grubby has gone on to become the leading goal-scorer in the National League South and was, at the time of this release being written, was the top scorer in 2017 in the top six tiers of English football. No mean feat and one of the reasons Forest Green have signed him to join their squad.

FGR gaffer Mark Cooper said of his latest signing, “He’s one we’ve been tracking for a while, Scott Bartlett knows him well. He played well against us in pre-season and we kept tabs on him and he has continued to score goals. We think he is one that can certainly come into our squad and help us at the top end of the pitch.”

Mark went on to add, “He’s got great ability, he can go past people and score. The more of those you have got in the team, the more chance you have of winning games. He is flexible in that he can play wide, he can play down the middle, he can play off the middle, it’s important all the players we bring in have flexibility. You look at his goal record compared to anyone else we have signed, he has got a fantastic goal record for someone who is not really a striker – he’s certainly one I expect to chip in with goals.”

Marc McGregor said regarding the departure of the prolific midfielder, “Dayle has been a fantastic servant to Weston Football Club, and nobody could deny him this opportunity to go on and further his career. He will not only be missed on the pitch as a great footballer, he is also a great lad off the field. I truly wish him all the best and look forward to seeing him test himself at a higher level, where he is more than capable.” 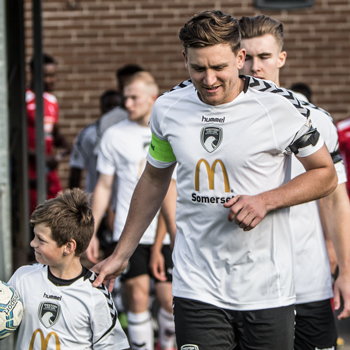 Dayle leads his team out. ©Will.T.Photography

“Grubby’s form over the past few seasons has been exceptional” added Rob Boyd, assistant coach at the Woodspring, “I really can’t understand how it has taken this long for him to be given his chance in the football league. His goal scoring record for a wide player is unbelievable, he is a consistent threat to the opposition as a goal-scoring threat in every game he plays in. “Weston has been a massive part of my life” Dayle said about his time at the Woodspring Stadium, “My time here has been really important in my development as a player. I’ve thoroughly enjoyed being part of this team and love playing with the current group but I feel I have to grasp this opportunity, I want to push on and test myself in the football league and I feel Forest Green is the perfect club for me to do that.”

Seagulls Managing Director, Oli Bliss, went on to summarise the clubs feelings, “The club would like to thank Dayle for everything he has done over the past 10 years. He has been instrumental in maintaining National League South Football for the club. The clubs’ philosophy is to produce its own young players and develop them with the guidance of highly skilled coaches. It is a known fact that the club doesn’t have the biggest budget in the league and therefore this philosophy is what keeps us competitive. Ultimately if we as a club have done our job properly then our young players will develop and move on to bigger and better things. This was shown with the sale of Brad Ash and now with Dayle Grubb. I’m sure that there will be many more players securing professional contracts over the coming years as we continue to develop our young squad. I would like to wish Dayle all the best in the future both personally and on behalf of everybody involved at the Woodspring.”