AFC Totton defeated a Weston side 3-2 after extra-time in a game where the Seagulls didn’t put their numerous chances away.

Weston were getting their early opportunities when James Waite had an early shot from George Dowling’s low corner blocked, and Charlie Madden then toe-poked wide from another Dowling corner.

Weston broke the deadlock when Isaac Pearce turned on halfway and fed in Joel Randall, who held off the defender and fired in at Alexander Cull’s near post on his left foot to put the Seagulls ahead. 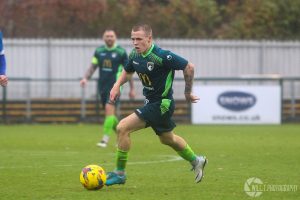 A dipping volley from Craig Feeney 18 yards out smacked the crossbar as Totton looked for a response, before Pearce had a shot saved by Cull after he was flicked in by McCootie with Waite putting the rebound over the top from six yards out. Dowling’s effort after being slipped in behind by McCootie was parried away by Cull.

Totton equalised when a Matthew Hartmann free-kick was headed away by Madden but only as far as Feeney, who leathered a strike into the top corner on his left foot to bring the hosts level.

Randall almost replied immediately for Weston when he was played in behind by Madden but his shot struck the far post and fell back into the arms of Cull. Just before half-time, Waite had another opportunity after being slipped in by McCootie but his left-footed shot towards Cull’s near post was kicked away by the home keeper.

After the interval, Waite placed a shot wide of the target when Randall cut the ball back to him, and Dowling’s corner was headed wide of the target by Tindle. Randall also saw a cross-shot take a slight deflection and be pushed away by Cull at the near post.

McCootie fired a 25-yard shot against the post after driving in between two defenders, and Waite had a shot tipped over the bar after taking aim from 18 yards. Feeney had an effort from 18 yards hit the side netting before the game entered extra-time. 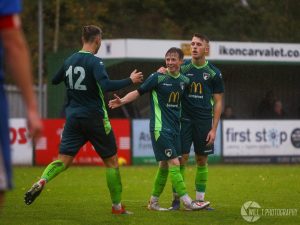 Ryan Jones entered the fray for extra-time, and his first real chance came with a goal. Scott Laird’s delivery from the left was pushed away by a diving Cull, but only to Jones who brought the ball under control and fired into the corner to put Weston ahead.

Totton substitute Liam Farrugia got another equaliser though when Matt Boszier’s delivery from a corner was met by the head of Farrugia, and he headed into the back of Purnell’s net for 2-2.

Six minutes later, and the forward had scored again. A sloppy pass out was intercepted by the forward, and he fired into Purnell’s top corner from 25 yards for 3-2.

Weston attempted to get back into the game during the second period of extra-time, but couldn’t break down an organised Totton backline which saw the hosts progress on to the next round of the FA Trophy.