Luke Purnell’s early penalty save a minute into the second half wasn’t enough to prevent the Seagulls losing 2-0 to local rivals Bath City.

Inside the opening ten minutes, Ryan Brunt blazed over the bar from Joe Raynes’ pull-back across goal, and a volley from Andy Watkins after taking the ball on his chest was nowhere near troubling Weston shot stopper Luke Purnell.

Sean Rigg dragged his left-footed effort from 25 yards wide of the goal after some neat football from the home side, before Jarrad Welch’s curling free kick from an angle for the visitors was comfortably held by Ryan Clarke.

Brunt had two bites of the cherry, first played in behind but Purnell was out quickly to stop the shot on goal but with the ball bouncing back to the striker, the former Exeter man fired into the side netting with the angle against him.

Adam Mann’s shot after cutting inside was headed behind for a corner by the tall figure of 6’7″ Matt Bower, before Weston came the closest they would do all afternoon. Ben Swallow’s delivery into the area was headed out by Robbie Cundy but only as Alex Byrne 18 yards out. His scuffed volley was missed by Jamie Lucas, with the ball striking the post. The ball fell invitingly for Lucas, but he nodded wide from a few yards out.

As the half wound to an end, Rigg’s 25-yard free kick dropped wide of Purnell’s goal, and Welch’s knuckleball attempt at a free kick from 30 yards was hit low and hard, but Clarke was able to hold comfortably.

From the second half kick-off, a neat Weston passing move led to Welch bursting away from James Morton and his low shot from 25 yards being held by Clarke. A minute later, Bath had a perfect chance to break the deadlock when Bower pushed Brunt from a long throw in the area. The referee pointed to the spot, with Rigg stepping up to do the honours. However, for the first time in his Weston career, Purnell guessed the right way and palmed away Rigg’s spot kick to keep things deadlocked.

Weston would have gone one up if it weren’t for the late intervention of Jack Batten, getting across to block a Tristan Plummer shot at the near post from George Nurse’s cut-back. Brunt’s shot from 18 yards was easy for Purnell to hold, after Jason Pope had tried an unorthodox clearance with his head while on the floor after slipping.

Bath broke the deadlock 56 minutes into the tie when a Bath break upfield came to Mann, who cut onto his left foot and whipped a cross into Rigg at the back post. Free of any Seagulls defender, he nodded into the corner to put the Romans ahead.

Bath got a second six minutes later when the ball broke for Rigg 25 yards out. Steadying himself, he lined up the effort and his shot took a wicked deflection off of Joe Raynes and into the corner past Purnell to double Bath’s advantage. 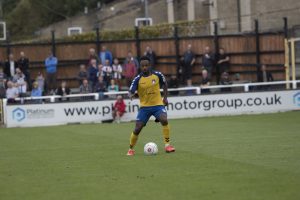 A switch to 3-5-2 didn’t look to do Weston any good, when Brunt was slipped through despite appearing to be offside but his shot hit the post and rolled out for a goal-kick. Raynes’ effort from 18 yards after running from right to left was held low down to Purnell’s side.

Bath substitute John Mills had an effort saved at his feet by Purnell, who had come rushing out quickly, following Anthony Straker’s easy burst beyond the Weston backline. The Seagulls’ last chance of the game fell to Naby Diallo, who flicked a header wide of Clarke’s goal from Nurse’s cross.

MOTM: Luke Purnell – The Weston shot stopper pulled off some good saves throughout the first Somerset Derby of the season, and saved Rigg’s penalty well. Neither goals were of the academy product’s fault.