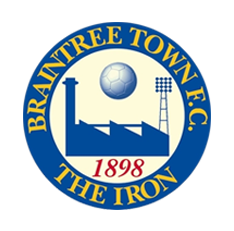 In a spirited, class performance away to Braintree Town the Seagulls, soaking up the second-half Braintree pressure to secure a 0 – 1 win away from home.

Weston started the brighter side, Dayle Grubb shooting wide from 18 yards following a Tristan Plummer cut-back, before central midfielder Naby Diallo also shot wide from the same spot after captain Grubb looked to create a chance down the left-hand side.

Danny Greenslade then volleyed a Braintree header off the line, before the home side had a goal waved away for offside. The Irons had pushed down the wing to fire a shot towards goal, Luke Purnell getting down well to parry the effort, striker Phil Roberts turning in from close range but the linesman’s flag was raised.

Braintree continued to pile on pressure from corners, but Weston countered with pace when given the opportunities. Plummer released Gethyn Hill down the left in the 35th minute, the in-form winger cutting inside but couldn’t find the back of the net. Just before half-time, Ash Harper strode forwards, riding a challenge and finding Grubb in space but his effort was blazed over on his left foot.

Following the interval, a long ball was knocked over the top of the Braintree defence with Hill racing onto it, but his half-volley hit the side netting.

Greenslade sent in a cross from the left that was half-cleared by a Braintree defender to the edge of the box. Harper the first to react, taking the ball down, shooting on his left into the far corner to break the deadlock.

Grubb curled a free-kick over the bar after being sandwiched in between three defenders as they tried to dispossess him, and again came close 10 minutes later. The winger intercepted a pass out of the home defence, running at the defender, he placed his effort narrowly wide.

A minute later, the Seagulls again came close when Grubb squared for Jake Reid. The substitute got the ball out of his feet, but his effort on goal was blocked. The rebound fell to Jake Lee, yet his shot was blocked and cleared off the line for a corner.

Weston had two penalties turned down late on when Jake Lee was bundled over inside the area. Moments later, Irnti Rapai tried to twist and turn inside the box, being tripped by a defender however both appeals were turned away by the referee.

MOTM: Naby Diallo – Intercepted everything in the midfield, constantly making passes forward and truly stepped up while Weston were under pressure from Braintree’s forward attacks.