After a dramatic last-minute victory over Salisbury in the FA Cup second qualifying round on Tuesday night, Marc McGregor’s side were brought back down to earth and the harsh realities of National League South football straight away. 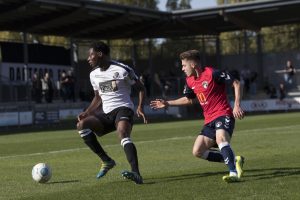 Only 14 minutes had passed when the Darts took the lead. Nifty play down the left led to a floated ball into the Weston danger zone, and Lee Noble was there to simply steer the ball past Liam Kingston into the bottom left of the net.

Seven minutes later and Weston were almost level. Jake lee turned into a woodworker and carved open the Darts’ defence, producing a stunning 40-yard pass through to Brad Ash. Keeper Deren Ibrahim did well and came out fast but conceded a corner in the process.

This time the legendary corner routine, seen many times before by the Weston faithful, was deployed again. Alex Byrne’s low driven delivery was dummied twice to the bemusement of the home side, and Gethyn Hill was left to fire from the edge of the area. His shot cannoned off the crossbar and it was a let-off for Dartford.

In the 34th minute, Weston had their best chance of the half so far via Lee, through yet another corner. The conventional method was used this time by Byrne and it was swung into the mixer, where Lee was waiting at the back post. He headed down towards goal but somehow Ibrahim was there to deny an equaliser. 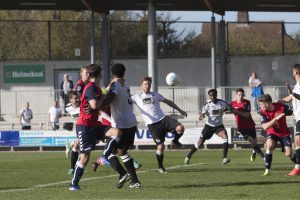 It was looking like another half of missed opportunities and undeserved score-lines, but that was to change at the perfect time.

On the cusp of half-time with virtually the last kick of the first half, Gethyn Hill grabbed his first goal of the campaign. The Welshman picked up the ball on the edge of the box and had only one thing in mind. He drove low with power into the bottom-left and deservedly gave Weston an equaliser.

The second half started slowly with neither team being able to create any clear-cut chances of note until the 64th minute. Jacob Cane was fouled 25 yards from goal and, after shouts from Jarrad Welch in the stands, George Nurse decided it was his one to take… and take it he did. His rocket towards goal got a deflection to carry it onto the crossbar and for the second time in the game for Weston it was the woodwork keeping them out.

As often happens at this level, a chance a one end is often followed with one at the other, and two minutes later that was the case through another set piece.

This time a Dartford free-kick from 40 yards was profited on. The ball was floated in and two suspiciously offside-looking men were clean through on Kingston, with a simple pass across goal allowing Jamie Philpot to roll home into an empty net from ten yards for 2-1.

Not to rest on their laurels, the Darts pushed on. A couple of curlers first from Kenneth Yao and then Ben Greenhalgh in the 74th and then 77th minutes had to be smartly dealt with by Kingston.

The game turned scrappy soon after as the Seagulls pushed for a second equaliser but it never came, and a quest for a first league win of the season goes on.

MOTM: Gethyn Hill – Worked relentlessly all game and never shied away from a 50:50. Popped up with a goal too at a vital time for his first goal of the season.