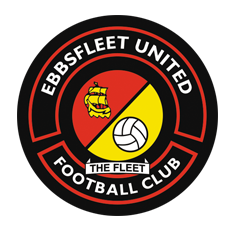 On a blustery trip to the home of Ebbsfleet United, Stonebridge Road, the Seagulls went down 2-1 to an Ebbsfleet United side that stole the game in the final ten minutes.

Early on, Ebbsfleet striker Danny Kedwell found himself one-on-one with Weston keeper Luke Purnell, but right-back Jason Pope made an incredible recovery tackle, sliding in and diverting the ball away from Kedwell’s feet, and out for a corner.

With Ebbsfleet piling on the pressure from the corner, Bradley Bubb found himself in space on the edge of the box, and sent a curling a shot onto the right-hand post, but was denied by Pope again, who swiftly cleared the ball away.

Midway into the half, the Fleet found themselves down Weston’s left side, sending a teasing ball down the channel, Ebbsfleet got there ahead of Purnell, to chip it over the Weston shot-stopper towards goal, however Pope was once again on hand to clear.

With half-time looming, captain Dayle Grubb managed to weave inside the Ebbsfleet defence, however he fired his shot from around 20 yards out into the back of the stand, leaving the deadlock still to be broken as the teams went in at the break.

In the second half, Weston emerged with an attacking purpose and two minutes into the second period, Welshman Lloyd Humphries slashed wide when well placed on the edge of the box from a Grubb cut-back.

Weston took the lead on the 53 minute mark, and once again through a piece of mastery from Grubb. The winger stepped up to take a free-kick 25 yards out and curled it towards goal. Fleet ‘keeper Nathan Ashmore got across to push the ball aside at his near post, however his fingertip save deflected the ball onto the post with the ball then bouncing into the back of the net.

A few minutes after the goal, Weston almost grabbed a second when a long ball was spilled by Ashmore as Jake Lee jumped to challenge him. Rollin Menayese then poked the loose ball towards goal, however an Ebbsfleet defender slid in to clear the ball from the line.

Ebbsfleet equalised ten minutes from time when Kedwell found himself a yard of space outside the box, driving the ball past a stretching Purnell, and in to the corner.

The Fleet picked up all three points just a couple of minutes later when a ball into the box was knocked down, with substitute Darren McQueen arriving to volley home, and with the win Ebbsfleet maintain their pursuit of table toppers Maidenhead.