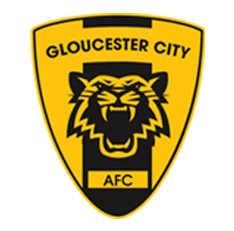 The game started in dramatic fashion, pretty much straight from kick off Tristan Plummer worked his way into the box, only to be scythed down, as a result the the referee showed no hesitation in pointing to the spot. Gethyn Hill stepped up and smashed the ball into the centre of the net, putting the Seagulls 0 – 1 up literally inside the opening minute.

Following that lightning start the match was then end to end football, the home side looking to find joy from getting the ball out wide and firing in low crosses that were begging to be tapped in, but through consistent impressive marking from Jason Pope and Harvey Smith and a little bit of luck, Weston always got the ball away and up the pitch for a counter attack, often led by Jarrad Welch and Plummer.

Welch was instrumental in the Seagull’s second goal, after a fast break and some slick passing Welch played an intelligent first-time through ball past the Gloucester defence for Jake Lee to latch onto on the right hand-side of the box. Despite the quality of the pass it was still a tough angle for Lee to shoot on, however he powered a daisy cutter into the bottom left corner to put the travelling side 0 – 2 up.

Neither side had another really quality chance throughout the rest of the first half, Luke Purnell collected a lot of high crosses but he wasn’t properly tested and the sides went into the break with the score remaining at 0 – 2.

Weston started the half fairly brightly; they were very comfortable letting Gloucester pass the ball around and hitting them on the break. In one of those counter attacks, the ever-impressive Danny Greenslade worked the ball to Plummer who did superbly to get to the byline inside the home side’s box, check back and fire a low driven ball towards the far post. The goalkeeper did well to catch it, however the ball slipped out of his hands, rolled across his body and dribbled into the goal. This bizarre goal put the visitors 0 – 3 up inside 50 minutes.

The remainder of the half was pretty much entirely sustained Gloucester pressure that was met with resolute Weston defending. However on the 60th minute, City looped a cross into the Seagulls’ six yard box that was volleyed in by Sam Avery to make it 1-3.

Weston were pegged back in their half for most of the last 30 minutes, however despite there being a couple of late scrambles in the box there wasn’t another clear cut chance for the rest of the game, which would suggest that the team did a good job of staying compact and frustrating the opposition.

The final score was 1 – 3, a professional and clinical performance in unenviable conditions meant that newly appointed Captain Jacob Cane and his side began the new year very positively.

The Seagulls’ next game is against Workington F.C in F.A Trophy at the Woodspring Stadium on Saturday 13th January, we hope to see you there.