In a solid display at the back, Weston held firm to bring home a point from Hemel Hempstead, thanks to a Dayle Grubb strike.

Hemel had the first chance of the game when Justin Amaluzor bustled into the box to find Charlie Sherringham, who could only slot wide of the post from a few yards out.

Some excellent team-play could have see Weston take the lead when Danny Greenslade laid the ball into Jake Lee. He knocked it into Grubb, who in turn found Hill. The striker knocked the ball through the last defenders legs, but his tame shot was into Hemel keeper Laurie Walker’s arms. 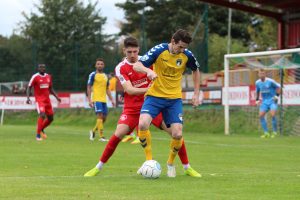 It was Weston who took the lead midway inside the first half though when Grubb steamed forwards, riding challenge after challenge until he was felled on the edge of the box. The captain dusted himself off, and with one glance towards the goal, he dispatched the shot into the top corner.

Hemel equalised on the half-hour mark though when a ball in the air was knocked down by Sherringham, who appeared to elbow Jacob Cane in the face to win the header, Jordan Parkes slotted the ball through for Amaluzor who dinked the ball over an oncoming Luke Purnell for 1 – 1.

The Seagulls almost put themselves back in front when Greenslade’s cross found Archie Collins at the back post, but his volley was well saved by the Hemel shot-stopper. Moments later, Hill’s toe-poke was blocked from a Lee knock-down.

Grubb had a couple of efforts go inches past Walker’s near post, with Sherringham backheeling just wide after the interval.

Weston had a goal disallowed late on when Hill found himself clear and slotted home past Walker first time, but the flag was raised for offside.

MOTM: Gethyn Hill – Chased everything, ran the channels well and was unlucky to not get himself on the scoresheet at least once today.