A Scott Laird penalty in the final few minutes away to Kingstonian takes the tie to a replay on Tuesday night.

Reece Hall drove over for Kingstonian from 20 yards after the ball fell to him from a corner, while Aaron Parsons headed a George Dowling free-kick over at the back post. Rob Tolfrey then pushed a Dowling free-kick from 25 yards away. 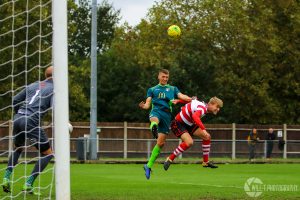 Jake Mawford had a volley cleared off the line after Laird’s cross was punched away by Tolfey as the first half petered out.

Luke Purnell tipped a free-kick over that had been flicked on in the middle, before Howe slashed a volley wide as he brought a ball down with his chest down on the edge of the box.

From the resulting goal-kick, Tolfrey rolled the ball out and the ball was worked out wide before the ball into the middle was met by Hall and he rolled into the corner.

The substitution of Pearce sprang Weston’s second half into life, as Jerry Puemo tripped the winger out on the wing and the right-back was shown a second yellow card and was on his way. 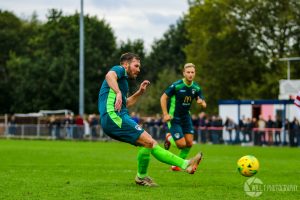 Weston did get their equaliser late on when Pearce was tripped up inside the box and the referee pointed to the spot. Up stepped skipper for the day Laird and he calmly slotted the ball into the bottom corner for 1-1.

Weston thought they had found a winner in the dying seconds of injury time when a cross into the box was met by the head of McCootie who powered a header into the back of the net, however the referee blew for a foul against the striker as the game heads to a replay.