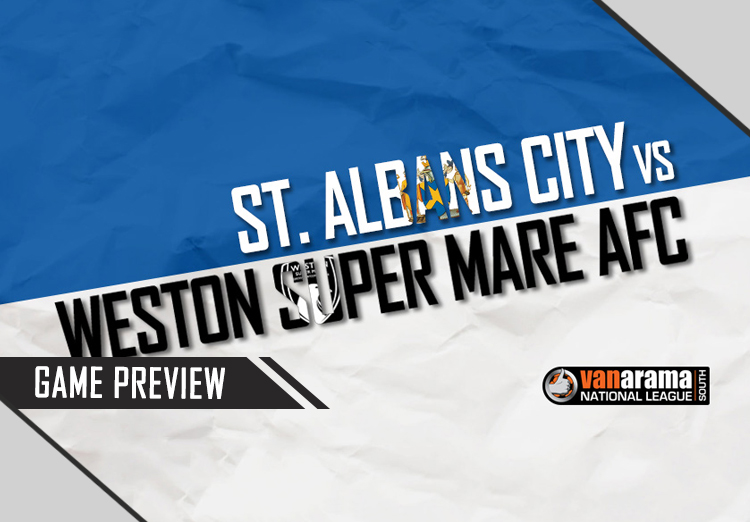 In a disappointing performance at Clarence Park, Weston succumbed to a 3 – 0 defeat at 10th-placed St Albans. In a game where chances were few and far between for the Seagulls, a flurry of first-half goals from the hosts consigned them to an away from home defeat.

With an unchanged lineup from their past two meetings at home to both Bishops Stortford & Margate, Westons only requirement to secure safety was to see Gosport lose their game at home to Oxford City.

However, their game didn’t get off to the best of starts when a Dayle Grubb corner was cleared, allowing the hosts to break up-field. The ball was taken by Charlie Walker, who cut inside onto his right foot and curled the ball into the top corner for 1 – 0.

It didn’t take St Albans long to get themselves a second goal, Shaun Lucien was able to find space for himself in the area, before taking a touch and curling his effort into the top corner in stunning fashion, not dissimilar to their first.

Weston looked to get themselves back into the game when Grubb controlled the ball before beating his man however his close-range effort was palmed away by the St Albans keeper, James Russell.

St Albans then found the net again to put themselves 3 – 0 up just after the half hour mark. Zane Banton took on left-back Danny Greenslade, going to ground following the challenge by the sliding loanee, with the referee pointing to the spot. The penalty was a dubious one, with Greenslade appearing to get the ball. Banton converted the spot-kick at the second attempt, with the first being disallowed for encroachment.

Gethyn Hill hit the side netting when well placed before the referee blew up for half-time, with Jacob Cane making his comeback from injury and Jake Reid brought on to help lead the frontline at the interval.

Striker Brad Ash tested Russell with a low strike just after the hour mark before Cane saw his low drive put over the bar by a diving Russell. Jake Reid then saw his shot blocked before Grubb saw his point-blank effort saved by the feet of Russell.

Despite this result Weston secure their National League status due to Gosport’s 1-0 loss to Oxford City, with the Seagulls attentions now turning to the last home game of the season against Eastbourne Borough this coming Saturday.