Away to Walton Casuals, the Seagulls lost 2-1.
Weston had the first shot of the game when Dan Martin drove forward, and his drilled cross to the near post was headed wide by Owen Howe. Walton then came forward themselves, with David Fitzpatrick glancing a header wide from a Cheyce Grant cross, and Grant then had a chance himself but curled over from  18 yards.
Niall Maher got down sharply to kick away a low effort from Rohdell Gordon, before the Seagulls took the lead. 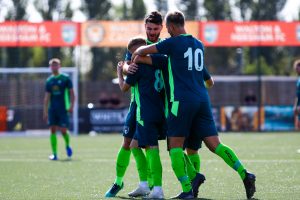 Joel Randall attacked the home right-back Joseph Morrison with pace, and the pair got in a tussle on the byline. Randall came out best, and the ball broke for Nick McCootie. The striker laid the ball across to Isaac Pearce, and he drove in from 18 yards for his first Weston goal.
Walton left-back Jude Mason was fed down the left channel, but his shot from an angle was dragged wide of the target.
Walton did equalise when Gordon latched onto a long pass and drove inside. Catching a sight of goal, he drove inside at Maher’s near post to even up the scores.
In the second half, Howe had another opportunity but blazed over the bar from a quick Martin free-kick forward, and Maher kept it level down the other end by keeping Grant out with his feet following a through-ball from Gordon. 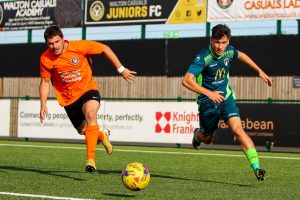 Walton got the winner though when a cross into the box following a series of corners landed right on the head of Jorell Johnson, and he powered a header into the corner from six yards.
Weston had one last chance though, but Randall was kept out at the near post after Martin had slipped him in behind.
FT: Walton Casuals 2-1 Weston (Gordon 39, Johnson 84 – Pearce 24)
Weston XI: Maher, Davies (Mawford HT), Martin, Byrne, Parsons, Tindle (C), Llewellyn (Welch HT), Pearce (Hendy 85), McCootie, Howe, Randall. Unused substitutes: Madden, Malshanskyj.
MOTM: Joel Randall