Bath City took the spoils in a visit to the Woodspring Stadium, where the Seagulls ended up finishing the encounter with nine men.

Jennison Myrie-Williams had an early chance for the Seagulls but volleyed over at the back post from Jacob Cane’s clipped cross, before Adam Mann put over the bar when one-on-one with Luke Purnell.

Marlon Jackson nodded a George Nurse free-kick into the gloves of Ryan Clarke, with Romans captain Anthony Straker dragging a shot from the edge of the area wide at the other end. 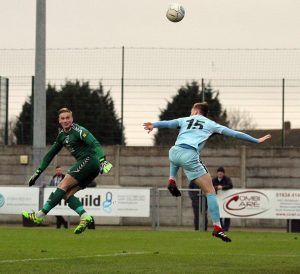 Bath broke the deadlock when a free-kick into the box was flicked on towards Robbie Cundy and in an attempt to win the ball, Purnell came speeding off his line but the Bath defender reached the ball first and flicked it over Purnell and into an open net with his head.

Weston looked for an immediate response when Jackson’s whipped ball into the box found George Dowling, but the loanee could only head wide from 12 yards. Dowling again came close ten minutes later when his drive from inside the box was spilled by Clarke and went for a corner.

Weston launched a counter attack just before half-time as Dowling fed Myrie-Williams into space, but his shot was blocked by a recovering Jack Batten inside the box. Bath’s Tom Smith could have scored down the other end were it not for a poor shot, and Purnell could easily hold the midfielder’s scuffed effort.

Into the second half, a 25-yard free-kick from Dowling was held by Clarke at his near post, and Smith really should have bagged a second for Bath but put over from six yards while on the stretch.

Bath got their second a couple of minutes later when a shot was blocked and the loose ball came out to Raynes. The midfielder controlled but lifting what seemed to be a cross over the head of Purnell and into the corner to claim a marvellous, yet fluke, goal to double his side’s advantage.

Weston were reduced to ten men just before the hour mark when Cane, already on a yellow, was second best to a loose ball to stop Mann from counter-attacking, and recieved his marching orders.

Weston were then down to nine men when Pope was forced off injured after making all three subs, and the last action of the game came when Stearn’s low free kick from the edge of the area was blocked.

MOTM: Jason Pope – Popey was Weston’s star performer on the day, his runs out from the back often leading to Weston attacks and his well-timed tackles breaking up Bath attacks.