A Marlon Jackson brace wasn’t enough to help the Seagulls get a point against Billericay, with Jake Lee receiving his marching orders in the second half.

A Gethyn Hill free-kick was deflected over inside the opening two minutes, and George Nurse’s shot from outside the box flew over the bar.

Billericay took the lead in the eighth minute however when a cross was handballed by skipper for the day Lee inside the box, and proven goalscorer Adam Coombes confidently placed his spot kick past Purnell to break the deadlock.

Jennison Myrie-Williams drove onto a Hill layoff and found his shot inside the box deflected behind for a corner, before the Seagulls drew level. 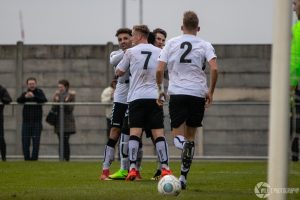 A corner was cleared and the ball was laid back to Nurse, who clipped a delivery back into the centre. Arriving on cue was Marlon Jackson, who volleyed into the net at the back post to spark scenes of jubilation from the Weston end.

Billericay regained control of the tie however when the ball was won in the centre of the pitch, and the visitors drove forward. An original shot from Kieran Cadogan was palmed aside by Purnell, but Coombes slid the rebound in to give his side the advantage.

Jackson outstrengthed Alfie Potter in a 50-50 and drove forward, his low effort deflected inches past the far post.

In the second half, Jackson backheeled striker Jamie Lucas in on goal, but Mark Smith was out of his goal quickly for Billericay to smother the shot.

A third came though for Billericay when a cross from the right found Cadogan, and his diving header from 12 yards nestled into Purnell’s net. 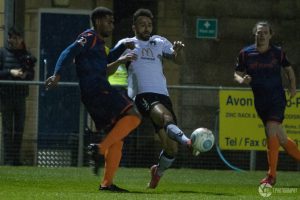 Weston had the chance of a lifeline with 15 minutes to go when Myrie-Williams was fouled inside the box, Up stepped Hill, but his penalty smacked against the bar as he went with too much power.

A few minutes later, Lee was shown his second yellow card for dissent after what can only be presumed as a few words said to the referee, and Rhys Murrell-Williamson had a close range shot saved by Purnell after debutant Tom Harrison’s clearance skewed against the post.

Weston pulled one back in added time after Jackson slipped through youngster Tom Llewellyn, and the substitute’s pull-back to Jackson 12 yards out allowed the striker to fire into the top corner, however his goal wasn’t enough to get anything out of the game.