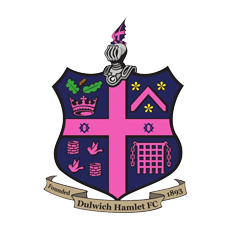 Weston played out a feisty encounter in a 1-1 draw against their visitors Dulwich Hamlet in the final National League South game of the 2018-2019 season.

Weston had the first chance of the game when Gethyn Hill’s shot was kept out by Preston Edwards and Jacob Cane’s rebound was cleared off the line by Dulwich Hamlet captain Magnus Okuonghae. Jason Pope was next to clear off the line, keeping the score at 0-0 as he scrambled the ball away in a goalmouth scramble.

Hill shoot wide of the target after Okuonghae took a wild swipe at the ball, failing to clear a ball into the box, but the visiting skipper got across to block a George Nurse effort as the winger bore down on goal.

Nurse again went close, his left-footed effort dribbling just wide of the target after being put clear down the flank, and Tom Llewellyn had his first chance of the afternoon but skied his effort over the bar after a cross from Cane. 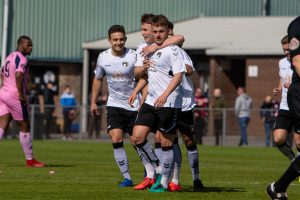 Weston celebrate as they score the opener

Just before half-time, the Seagulls took the lead when a Jarrad Welch free-kick from 30 yards out hit the post and bounced back out, but hit keeper Edwards on the back and rolled over the line to break the deadlock.

In the second half, Afolani Akinyemi blasted over the bar when well placed on the edge of the area, and the striker couldn’t make the most of a golden opportunity when Tom Harrison and Liam Kingston were involved in a bit of miscommunication at the back, with the striker rounding Kingston but not being able to roll the ball in from a tight angle.

Dulwich equalised in emphatic fashion, a loose ball falling to Aryan Tajbakhsh, who took the ball down and on the half-volley, he leathered a shot past Kingston and into the corner of the net to pull the visiting side level.

Kingston dived low to his left to push a shot away and out for a corner, before Alex Bray fed substitute Jamie Lucas, but the striker was unable to turn his effort home, stand-in goalkeeper Anthony Cook turning the shot behind for a corner.

Dulwich had a golden chance to win the game in added time, spilling a shot to Dan Thompson but he put the ball over the top of the goal from six yards out. With a minute of added time to go, Cook received his marching orders for an alleged elbow on Lucas in an off-the-ball scuffle as Weston prepared to take a corner.

MOTM: Jarrad Welch – The midfield enforcer throughout the game, the Welshman threw himself into tackles and broke up play well, playing a deeper role than what he’s used to.