First-half strikes from Scott Laird and Sam Hendy secured Weston’s way through to the FA Cup Third Qualfying Round with a 2-1 victory over Merthyr Town.

Weston came out the blocks quickly, Joel Randall finding Laird who in turn laid off to George Dowling to his right, but the debutant blazed over from 25 yards. Niall Maher held Ian Traylor’s shot after he cut inside, and Alex Harris was called into action down the other end when he had to tip over Nick McCootie’s cross. 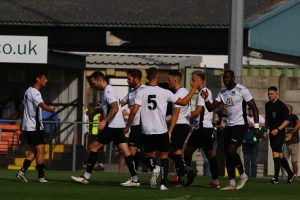 Weston broke the deadlock when Dowling’s low free-kick was tipped just wide of the post by Harris. From the corner, Randall played short to Dowling and he curled a cross into the box, leaving Laird to attack the ball and flick his header over the advancing Harris to break the deadlock.

Ryan Prosser had a long range effort deflected over by Tindle, and from the corner Ashley Evans glanced Ben Swallow’s delivery wide. Down the other end, Randall went close when his low shot was pushed away by the oncoming Harris after McCootie had fed him through, and Hendy just dragged the rebound wide from 18 yards.

Randall again went close as he went on a one-man mission after Weston had cleared a corner, skinning his man but his final touch just letting him down as Harris smothered the loanee’s toe poke.

Weston did double their advantage though on the stroke of half-time when Randall hared forward with the ball, and a recovering Merthyr defender dispossesed the forward. However backing up Randall was Hendy, and he stroked the ball under Harris and into the net. 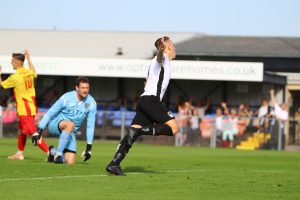 Eliot Richards sliced wide on the volley after Tindle had headed a Swallow free-kick away, before Merthyr got their noses back in it.

A misplaced pass went straight to Traylor, and he slipped in Prosser who drilled across Maher and into the corner to makes the scores 2-1.

Dowling set his sights from range and Harris pushed away his swerving strike, while Harris was out quickly to stop Randall’s shot at the back post from a Hendy pass. Down the other end, Maher was down quickly to stop a deflected Prosser effort.

Traylor fired wide on the volley from 25 yards after Prosser had knocked a long Harris kick down to him, as the Seagulls managed to hold on and secure passage through to the third qualifying round of the FA Cup.