Goals from Owen Howe, Nick McCootie and Joel Randall weren’t enough to pull the Seagulls to victory as a crazy five-minute period in the second half left the final score level.

McCootie had an early chance for the Seagulls when Scott Laird won the ball in midfield and allowed Isaac Pearce to drive at the defenders, before laying off to McCootie 18 yards out. The striker cut inside and saw his effort held at the near post by young Salisbury keeper Tom Smith. 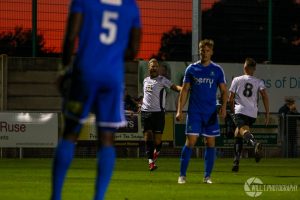 Weston took the lead just 12 minutes in when Howe, on his home league debut, swivelled from a pass and from the edge of the area, fired a shot into the top corner leaving Smith helpless to score his first league goal in a Weston shirt.

Pearce almost grabbed a second for the home side, but his run into the box and subsequent shot was pushed wide of the post by Smith.

Weston got a crucial second when on the counter, the ball made its way to McCootie 30 yards out. With just the keeper to beat and Salisbury’s defence nowhere to be seen, the experienced striker showed his composure and slotted beautifully past Smith’s dive into the bottom corner of the net for 2-0.

Dan Fitchett had his first chance of the night but his looping header from a free-kick was held by the confident Niall Maher in between the sticks, but Fitchett wouldn’t make a mistake the next time.

After a corner had been cleared, the ball was delivered back in by Lewis Benson and Fitchett climbed highest in the area to head into the corner of the goal past Maher to give Salisbury hope.

Weston looked to put themselves two in front again, but Greg Tindle’s overhead kick from a Randall corner flew over the bar, and Bay Downing curled a 25 yard free-kick over Maher’s crossbar.

After the interval, Salisbury had chances when Shaquille Hippolyte-Patrick poked just wide of the target, and threatened from corners.

It was from a corner that Salisbury would equalise, when the delivery into the box was met by former Bath City defender Kevin Amankwaah and he nodded in from close range. Immediately after the goal, Sam Hendy was shown a straight red card by the referee, for something that he had said to the referee, reducing Weston down to ten men.

Salisbury took the lead two minutes later when Shaquille Hippolyte-Patrick’s effort from 25 yards took a wicked deflection off a Weston defender and flew into the corner past Maher. 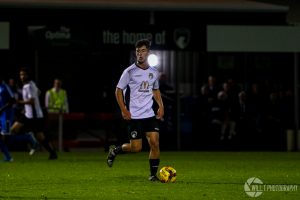 Less than 120 seconds later, and Weston were down the other end, causing their own problems. McCootie powered past a few Salisbury players and played the ball down the defender’s blind side for loanee Randall. Taking aim first-time, he powered into the net at Smith’s near post for 3-3.

With both teams smelling blood and not letting up, they attacked relentlessly with a winner on the cards. Howe blazed over the bar from a McCootie cut-back, and the former Salisbury striker had one cleared off the line while also having a shot at the near post held by Smith, while down the other end Nataniel Oseni had a header cleared off the line by Tindle.

With only two minutes added on at the end of the half, the referee blew for full-time as the game petered out and both sides had to share the spoils.