Truro’s Alex Battle had an early shot roll into the arms of Luke Purnell, before the visitors took the lead.

A ball forward from Truro found Weston defender Chris Knowles, but his attempted clearance struck his shin and bounced backwards, allowing early substitute Dan Rooney to steal in and slide past Purnell to break the deadlock.

Purnell was forced into action as Rooney’s header at the near post six yards out from Niall Thompson was excellently tipped over by the Seagulls keeper, before James Hamon held a Laird free-kick just minutes later.

Brad Ash should have got the hosts back on level terms just before the half-hour mark, when Purnell’s long kick found Laird in behind. The midfielder took a touch and played a low cross in to the loanee, but he could only slot wide of the near post while off balance. 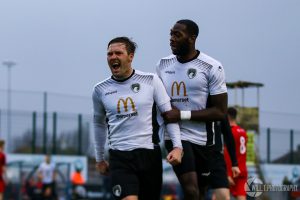 The Seagulls did get back on level terms not long after though, when Ash received the ball down the right. He looked up and worked himself a yard of space as he fizzed a low cross into the centre, and Laird got in front of his marker to slot in for 1-1.

The last chance of the half came to Weston, when Purnell caught a Truro cross and immediately kicked long in search of Ash. The ball bounced past the last man, and the striker brought the ball under control in the box but his effort from a tight angle hit the side netting.

In the second half, James Waite became the creator in chief, as one free-kick was headed wide at the near post by Aaron Parsons, before Chris Knowles met another free-kick at the back post, but his diving header went just off target. Rooney dragged wide at the other end for Truro from 20 yards.

The visitors retook the lead when a Ryan Law cross was met by Ryan Dickson, and his superb header beat Purnell and ended up in the far corner for 2-1 Truro.

With his first shot in a Weston shirt, Symons controlled a Knowles pass and turned on the edge of the area, but fired his effort into the arms of Hamon.

With time running out, Weston found time for an equaliser as the clock ticked into stoppage time. Isaac Pearce picked the ball up and darted into the box, being tripped by the outstretched leg of Austen Booth. With the referee pointing to the spot, Laird stepped up and as cool as a cucumber, he drilled his penalty into the bottom corner.
With a draw seeming likely, Weston fans were to be sent delirious by debutant Symons as he controlled an Ash cross on his chest inside the area at the near post, and brilliantly fired into the far corner to end any New Year’s Day hangover that the Seagulls supporters may have had. 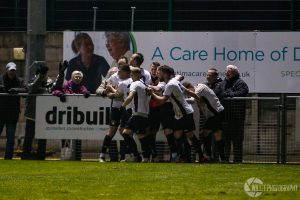