The Clarets won 0 – 3 away from home on Tuesday night as Weston’s search for a first home league win of the season goes on.

A central George Nurse free-kick went over the bar after Marlon Jackson was tripped on the edge of the box by Elliot Omozusi, before a Jacob Cane volley from 20 yards following a Tom Llewellyn knock-down with his head was easily gathered by away keeper Ashley Maynard-Brewer in the first five minutes.

A low Nurse free-kick from 25 yards was held by Maynard-Brewer, with Chelmsford getting their first real sight of goal 35 minutes in when Jonathan Giles picked the ball up and drove at Matt Bower. Cutting onto his left, Giles shot towards Purnell’s near post was palmed away by the Weston shot-stopper.

Weston almost took the lead when a ball into Swallow was cut back to the centre of the box by the winger. With the keeper out of position, Jackson’s left footed volley from 12 yards was cleared off the line by Omozusi and Chelmsford could clear.

A few minutes later, Chelmsford took the lead. A corner was cleared to Thomas Wraight outside the area and taking the ball on his chest, he thumped an effort into the bottom corner from 25 yards to put the Clarets ahead. 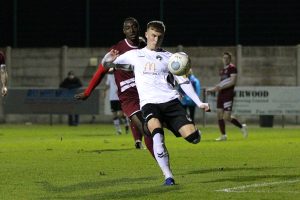 Llewellyn almost connected with a Nurse centre on the stretch in the second half, before Chelmsford sub Chris Whelpdale slashed wide from 20 yards as things remained tight at the Woodspring.

The score changed though with 20 minutes to go when a poor backpass to Purnell was latched upon by Rhys Murphy, and the striker could round Purnell as he bore down on goal and slotted into the Weston net to double his side’s advantage.

Purnell denied Wraight and Whelpdale from close range to keep Weston in the game, while Jason Pope dragged his attempt wide from 30 yards as the centre-back looked to take things into his own hands.

Chelmsford wrapped things up in injury time when Whelpdale found fellow substitute Scott Fenwick, who had his driven shot come back off the post. However, Wraight was on hand to tap the rebound in from a few yards out and seal the win.

MOTM: Tom Llewellyn – On his third league start for the Seagulls, the 17 year-old impressed once again, keeping things ticking over in the centre of midfield and linking play well.