A late goal from Eastbourne substitute David Martin consigned Weston to their sixth defeat from eight games, as a bumper crowd watched on.

Early on, Lloyd Dawes had an effort on the volley blocked by George Nurse at the back post, before the Seagulls came close when Gethyn Hill’s pass out wide to Ben Swallow allowed the winger to get at his man, but his outside of the boot cross was poked wide by Hill as he raced into the area at the near post.

Jason Pope escaped as he couldn’t clear a pass through to Dawes, his touch enabling the Eastbourne forward to hit the ball first time and drawing a good save from Luke Purnell. Swallow’s long ball over the top to Hill allowed the former Cinderford man to cut inside onto his right foot, with Harry Ransom blocking the effort. The ball rolled out to George Nurse, and his drilled effort was kicked away by Mark Smith.

Welch found Swallow on the right wing as Weston kept knocking the ball about, and the summer signing’s shot on his right foot was held at Smith’s near post. Dawes drove over from inside the area as he wriggled away from Pope, on his weaker left foot.

From a Seagulls corner, the ball bobbled up to Welch who had time to take the ball on his thigh, but could only fire over the top from inside the area. A couple of minutes later, Dawes took Sergio Torres’ pass in his stride, cut inside Nurse and curled over from the edge of the area.

Before half-time, there was time for one last chance as a Nurse cross into the pair of Hill and Jamie Lucas was nodded down, but not away, by Tom Gardner. Striding onto the ball from 18 yards was Welch, whose shot on the half volley from 18 yards was narrowly wide.

Following the interval, former Brighton man Dean Cox had a 25-yard drive held by Purnell, with the Weston shot-stopper alert after Dawes had got the beating of Pope and fired towards the custodian’s near post.

Eastbourne broke the deadlock, and got the winner, when Dawes ran down the right wing and got the ball across to Eastbourne sub Martin, who took one touch and smashed in beyond Purnell and the covering Pope on the line for 0 – 1.

Looking for an equaliser, Welch’s free kick from out wide beat everyone running into the centre, but Smith was alert to push the ball round the post for a corner. Ryan Hall went close for Eastbourne after captain Jacob Cane had carelessly given the ball straight to him, but Hall couldn’t make the most of the opportunity and drove wide from 20 yards. 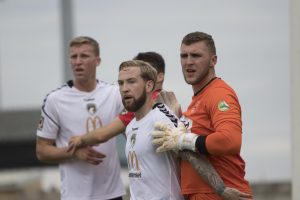 Into added time, Swallow’s floated cross to the back post dropped to Seagulls substitute Eli Phipps, but he volleyed into the side netting. In the final action of the game, and in front of an atmospheric main stand, Welch fed other Seagulls substitute Tristan Plummer into the box. The winger dinked the ball towards the penalty spot, but Swallow headed wide with nobody around him.

MOTM: Luke Purnell – The Seagulls keeper performed well, and made two quality saves throughout the game to give his side the chance of getting back in the game.