The Seagulls missed out on their first three points of the season as they let their lead slip, coming away with a draw and sharing the points with Oxford City.

After an uneventful first-half where Weston were dominant but unable to create many clear-cut chances, Jarrad Welch scored his third goal of the campaign with a seemingly comfortable second half display.

However, the Hoops made their way back into the contest soon after and equalised six minutes later through Kabongo Tahimanga, to give both teams a point.

After last week’s 4 – 2 loss at Billericay, Marc McGregor and his side came out of the blocks with a clear point to prove, starting strongly. Similarly to last time out the Seagulls maintained their possession of the ball well and didn’t seem shy of creativity, but simply lacked that final ball. 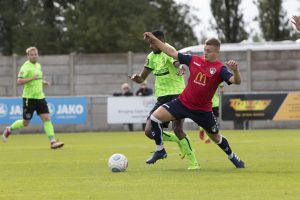 We’ve seen how good Welch is from range already this season, and after getting frustrated by resolute Oxford City defending he decided he’d try and pull another one out of the bag.

This time, on the 21st minute of the game, the Welshman drove with his weaker left foot from 25 yards, forcing a smart save from City keeper Craig King.

The game continued as it started, Weston were on the front foot but unable to grab that crucial goal.

Danger-man Welch was eager to change this, turning provider in the 37th minute when he fed a perfectly weighted ball through to George Nurse down the left flank, Nurse blazed over from just inside the box after being firmly challenged by a City man, the teams walking in at deadlock at half-time.

The second-half started much more evenly as Mark Jones’ men grew into the game, but were still unable to trouble Luke Purnell in the Weston goal.

In the 54th minute a Weston free-kick was swung in to the danger-zone by Welch, unlocking the door for his side, but new signing Matthew Bower couldn’t quite convert his header.

14 minutes later, Bower again used his 6’7 frame to rise above all in the box and confidently win his header, with the resulting effort just wide. 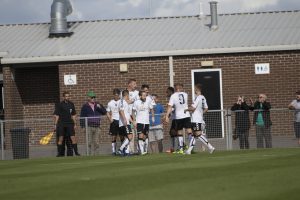 With 72 minutes played the pressure paid off through a familiar face. Not a lot seemed to be on when Jason Pope collected the ball deep in his own half, but no-one told him that. A spectacular 70-yard pass to Ben Swallow on the right unlocked the City defence, and after a neat lay off from Swallow, Welch slammed in his shot from the edge of the box and it was 1 – 0.

After a quiet game Luke Purnell acrobatically saved Zac McEachran’s strike from 30 yards conceding a corner. After failing to successfully clear the set piece, Tshimanga poked home from close range to tie the game up.

Tristan Plummer and Eli Phipps’ introductions gave Weston hope of a late winner, but ultimately the game ended with little spark as it fizzled to its conclusion.

MOTM: Jamie Lucas – Worked hard all day long despite not getting many chances at goal as the Seagulls No. 9. Jacob Cane worked tirelessly all game as a good captain should and deserves honourable mention.