Weston put eight goals past their community partner club Banwell in an enjoyable afternoon for all as the home side continue to prepare for the new season.

It took the Seagulls just a few minutes to net the first goal of the afternoon, as Nick McCootie’s powerful run earned his side a corner. Youngster Ryan Jones floated the ball into the mix, and skipper Greg Tindle rose to power home a header to make it 1-0. 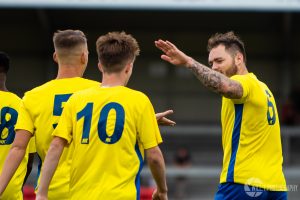 Weston soon found a second, when left-back Alex Byrne’s superb diagonal pass found McCootie. The strong forward cut inside onto his left and drilled home past the Banwell keeper from the edge of the area.

Not long before half-time, and it was a third for the home side. McCootie’s ball through carved open the visiting defence and despite Howe’s touch being slightly ahead of him, he reached the loose ball before the Banwell keeper and despite falling while challenged, the No.9 steered his shot into the net from a tight angle.

In the second half, Tom Llewellyn netted his first goal of pre-season by drilling in from outside the area after neat linkup play between the forwards ended with Ben Griffiths seeing his shot blocked from a Jones pull-back.

Banwell pulled a goal back on the counter attack, driving forward after forcing the Seagulls into an error, with former Seagulls academy player Callum Ham slotting in past Liam Kingston at the back post.

Weston regained their four-goal advantage though, when Byrne’s cross was handled inside the area. Up stepped the 18 year-old Llewellyn, and he confidently dispatched his penalty low into the corner for his second of the game. 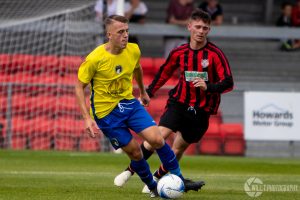 Sam Hendy got his first in a Seagulls shirt, turning on the edge of the area from a set piece and his deflected effort slipped through the grasp of the Banwell keeper and into the net.

Welch, who skippered the side in the second half, made it 7-1 after youth player Joe Creese escaped down the right and pulled the ball back for the midfielder, who sweeped in from close range.

Callum Eastwood rounded off the scoring as he finished tidily past the Banwell shot stopper to make it 8-1 near the end.