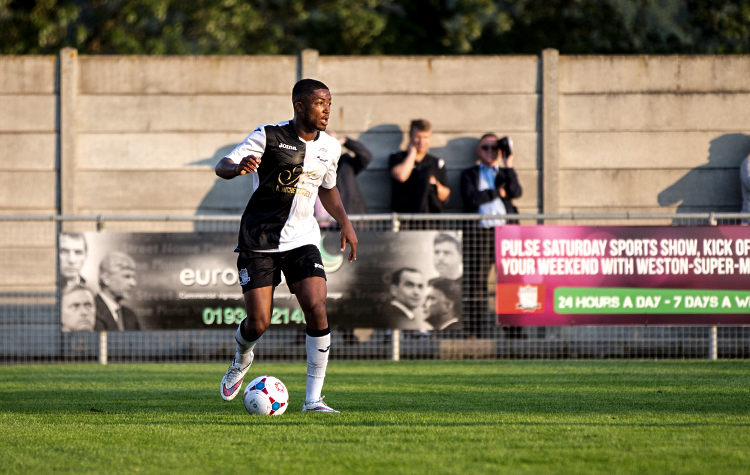 A second-half fightback from Weston-super-Mare AFC saw them cancel out a two goal deficit to draw with Newport County.

Aaron Collins’ wicked strike followed by Dafydd Jones’ slotted finish gave the travelling Exiles a comfortable two-goal advantage at the midway stage, but spirited resistance from the Seagulls after the break was rewarded, clawing back for a 2-2 draw.

A young Newport side, containing nine teenagers, started the game with greater fluency and sharpness, and were almost ahead inside four minutes through Aaron Collins’ downward header across goal, but Dan Jackson moved well to his left to maintain parity.

Collins, who was the standout performer in the first 45, soon stamped his mark on the evening, opening the scoring on 6 minutes. The pacey striker gathered the ball 30 yards from goal, turning instantly to smash a dipping effort over Jackson.

Weston rarely threatened as the first half progressed, and some comical defending on the half hour nearly put them in further arrears. Tom Jordan’s over-hit back pass nearly looped over Jackson, who instinctively pawed the ball to safety, forcing referee Alex Tremlett to award an indirect free-kick inside the Weston area. Visiting skipper Alex Rodman’s deflected effort from the resulting set-piece was remarkably cleared off the line by a sprawling Kane Ingram.

A second did soon follow though, with Collins once again at the heart of the move. Collins span Jordan and began to hare down on goal, before coolly squaring to wide-man Dafydd Jones who caressed the ball past a stranded Jackson in the Weston goal.

It took to until first-half stoppage time for the home side to get a clear sighting of the Newport goal. Jake Mawford helped-on to put Brad Ash in behind, but his half-volley was pushed over by Rhys Taylor.

Ryan Northmore reshuffled his lineup at half time, shifting formations and bringing Scott Wilson on for Jake Llewellyn – who performed well as he continued his comeback from injury – with the move almost producing an instant response, but Jordan could only head over from 12 yards on 47 minutes.

Another clear cut chance was passed up by the Seagulls on the hour mark, with Ash dragging horribly wide when gifted a chance with the goal at his mercy.

Wilson’s intent and strong running gave the Seagulls a focal point in the second half, and his efforts earned a free-kick when he was chopped down by Corey Shephard 25 yards out. Grubb whipped the dead ball towards the back post, where Weston skipper Jordan powered above the rest only for his thundering header to hit the frame of the goal, but Scott Wilson was on hand to mop-up inside the six-yard box, displaying the predatory instinct upon which he has built his goalscoring reputation.

With the Newport lead halved, Wilson was now beginning to link the play, smartly setting lively trialist Syd Fillpov towards goal with 10 minutes remaining, but his effort was comfortably collected by substitute stopper Joe Day.

While Wilson looked the likely source of the equaliser, it was fellow replacement Ollie Barnes who got the Seagulls level. First Barnes had a strong diving header palmed behind by Day, only to smash home a rebound from Grubb’s resultant corner with five minutes remaining.

And in chaotic fashion, Weston were immediately through on goal from Newport’s kick-off, but Brad Ash’s night of frustration continued, as he could not slide past the onrushing keeper.

Weston continued to push hard in the remaining moments, but a winner could not be conjured, meaning it was honours even at the Woodspring.

Man of the Match: Pat Keary was awarded Man of the Match for a classy display at both centre-half and right-back, which largely nullified Newport’s threat down the left flank.