In what was probably the most confident and assured performance from Weston yet this season, Gethyn Hill marked his return from a loan spell at Hereford with a brace, while loanee Archie Collins got his name on the scoresheet also.

Dartford started well, a loose ball being played through to Alfie Pavey. He squared up Jason Pope, beat him on the outside but dragged his shot wide when given a yard of space on 16 minutes.

Weston began to get a foothold in the game, and took the lead through some excellent midfield work by Jacob Cane. He intercepted a pass, and with Danny Greenslade immediately off like a rocket, the ball was fed down the left for the full-back. Looking up, Jake Reid’s excellent movement dragged both centre-back’s to the front post, and Greenslade’s floated cross was glanced home by Hill at the far post. 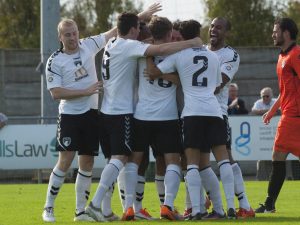 It didn’t take long for the Seagulls to get their second, coming through captain Dayle Grubb cutting onto his favoured right foot. His shot from the edge of the area hit the post, but fell kindly for Hill. It took one touch for the Welshman to get it under control, and a second to slot underneath Gibraltan international keeper Deren Ibrahim for 2 – 0.

Dartford looked for a way to get back into the game but Pavey could only sky his effort over from six yards. Marc McGregor’s Seagulls almost made it 3 – 0 before the break when a corner bounced around the box, eventually finding a lurking Cane. His header looked destined for the net, but a Darts defender headed clear off the line.

Straight from the restart, Weston wasted no time in getting their third. Grubb latching on to a loose ball in midfield, drove further inside and fed Collins on the right. He squared up the left-back, and as soon as he caught a sight of goal from just inside the box, curled an excellent effort past Ibrahim into the net, with aid from the post helping it in.

Pavey thought he had given the visitors a lifeline when he challenged Luke Purnell for the ball, and with the ball dropping kindly for him, he tapped into an unguarded net, yet was flagged as being offside by the assistant referee.

Pavey smashed over the bar, summing up his day with some poor finishing, as Weston continued to dominate proceedings. Grubb laid the ball off for Hill, who curled narrowly wide and Cane had a shot go straight at Ibrahim to end the afternoon’s proceedings.

MOTM: Gethyn Hill – On his Weston debut, the striker netted twice to see off the league leaders, alongside some excellent movement and aerial ability.