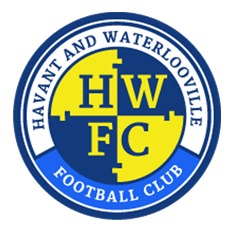 Weston struggled against the back five of Havant & Waterlooville, who hadn’t won at the Woodspring Stadium since a 1 – 2 victory in 2010. With Havant’s quick passing and clinical approach in front of goal the Seagulls saw their hopes of three points disappearing before their eyes.

It took Havant under a minute to open the scoring when left wing-back Rory Williams’ cross was missed by a sliding Aden Baldwin, for Jason Prior to volley into the net.

Theo Lewis had an opportunity a couple of minutes later, but Luke Purnell held the shot easily.

The Hawks doubled their lead a quarter of an hour in when a free-kick was awarded 25 yards from goal after a foul on Prior. Up stepped Williams, his curling free-kick dispatched into the top corner, leaving Purnell static.

Wes Fogden narrowly missed a cross from Lewis, but it was the latter who got the third goal of the afternoon 25 minutes in.

Williams was at the heart of proceedings again, his cross met the well-timed run of Lewis, who powered home a header for 0 – 3.

Weston’s only shot of note in the first half came from Jake Reid, his effort was blazed well over the bar, with Weston going into half-time trailing 0 – 3.

Weston pulled a goal back inside the first minute following the interval. A hopeful ball nodded on by Reid into the run of Cane, who controlled the ball and calmly slotted past the keeper to pull one back, giving themselves and the home supporters a glimmer of hope.

Williams killed the game off though with his second of the afternoon, being played clean through by Prior and putting the ball confidently past Purnell.

Substitutions seemed to half the game’s tempo momentarily, but Hawks keeper Ryan Young was called into action when substitute Ben Seymour’s deflected and looping effort was tipped over the bar. Reid failed to connect with a Baldwin header across goal as the Seagulls searched for a second.

Fogden could only shoot straight at Purnell as the clock ticked down, and Seagulls substitute Jake Mawford saw a shot from outside the area tipped over by the fingertips of Young.

On a disappointing and frustrating afternoon, Weston will look to get back to winning ways at home to Wealdstone on Tuesday.

MOTM: Jacob Cane – Got himself on the score-sheet on an afternoon where chances were few and far between for Weston. Looks to be over his early-season injury.