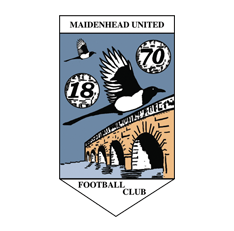 In the third of five home games this month, Dave Tarpey struck twice to break the all time record of the most Vanarama South goals in an individual season, in a 3-1 win over the Seagulls.

Weston came close inside the opening two minutes when a Grubb corner was swung in to the box, with centre-back Rollin Menayese just nodding just wide.

Weston threatened again midway inside the first half when Grubb played a ball for Reid who then laid it back to Grubb on the edge of the box. He unleashed a shot at goal that saw Maidenhead keeper Carl Pentney stretch his fingertips to it, tipping it onto the bar before Lloyd Humphries saw his effort tipped out for a corner.

Five minutes before half-time, Humphries drove forward from half-way and released Grubb down the left side, he then played a one-two with Humphries receiving the ball just inside the box. As Humphries, Reid and Ash were all queuing up for the resulting cross, Grubb’s attempted cut-back was cut out by a Maidenhead defender and out for a corner.

Maidenhead strongly cleared their lines and broke upfield with Menayese unable to catch the winger. The cross found Tarpey who poked into the roof of the net to send Maidenhead into the break 1-0 up.

The Seagulls continued to have the main share of possession as they attacked the main stand, and Weston got their equaliser after some neat build-up play. Jason Pope received the ball out wide who then floated his cross into the box, fellow Exeter academy graduate Jacob Cane controlled the ball on his chest and hit home for 1-1.

It didn’t take long for the visitors to get themselves back in front however when Sean Marks was able to slot home after the defence was split open by a pass through the middle.

Late on in the game, striker Dave Tarpey struck once again, breaking the record for most goals scored in a Vanarama South season. He attempted to round Purnell once but the keeper got his body in the way. However, the ball rebounded off Tarpey, who ran onto the loose ball and calmly cut back onto his right foot, then rolled the ball home to send Maidenhead home happy.