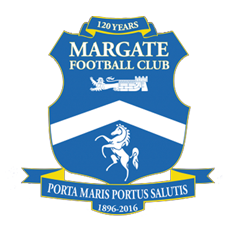 A community open day at the Woodspring Stadium saw a 740-strong crowd witness Weston take a further step towards National League South status next season with a 3-1 win over Margate, helped along by a Brad Ash double.

With an unchanged side from last week’s 5-0 win over relegated Bishops Stortford, Weston started quickly when Ash was brought down on the edge of the area. Dayle Grubb then stepped up to the set piece with an air of predictability, his low free-kick deflected into the corner of the net just three minutes in.

Weston continued to find pockets of space to work the ball into, with Ash Kington fluently controlling the game in midfield and Brad Ash making the runs in behind in order to work himself space.

Margate drew level when a free-kick was dinked into the box and prolific striker Michael Thalassitis glanced his header past Luke Purnell, who hesitantly stepped forward to claim the ball only for Thalassitis to hone in on the ball.

Weston took the lead back midway through the half when Kington played an exquisite ball through to Ash with the outside of his foot, finding himself clean through before stroking the ball confidently past Jonathan Miles.

Weston continued to attack with Aden Baldwin nodding wide from a Grubb corner and then Gethyn Hill was just inches away from stabbing a Theo Wharton cross into the net.

Weston put the game to bed ten minutes before the interval when Ash was fouled inside the box, dusting himself off he confidently dispatched his spot-kick into the corner to make it 3-1 Weston.

With relegation staring them in the face, Margate came out and looked to get themselves a goal back however the Seagulls stayed strong and battled well across the whole pitch.

Danny Greenslade came close to claiming himself a goal when he took the ball away from Grubb’s foot but Miles got a foot to the driven shot. Grubb slashed wide with his weaker left foot when he cut inside from the right following a corner. Some neat build-up play often saw Weston get into the right areas but lacked the final product as Margate finally saw their National League South status slip away, with Weston putting one foot forward in the fight to ensure survival.