Weston ran out 3-0 winners against Oxford City at the Woodspring Stadium. The Seagull’s visitors slowly grew into the game in the second half but the host’s first-half performance ultimately saw Weston claim all 3 points.

Oxford initially started well, seeing them getting their first chance of the game just three minutes in. A cross came in from the right, and Kaimon Anderson acrobatically adjusted his body to volley towards goal, only to see keeper Luke Purnell superbly tipping over the bar with a world class save. 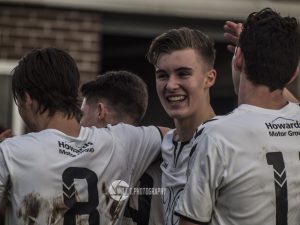 Jason Pope celebrates with the team.©Will.T.Photography

Weston broke the deadlock midway through the first half when Jacob Cane’s harrying of Oxford’s midfield saw a loose pass picked up by Dayle Grubb around the halfway line. The captain surged forward with a defender backing off him and with excellent precision, Grubb caressed the ball into the far corner from 18 yards.

Mohamed Chemlal impressed once again, with his sublime skills and tricks earning him applause from Weston fans. Released down the right, he neatly backheeled into the path of Lloyd Humphries, who saw his shot blocked, deflected out by an Oxford defender. Barker found himself in space at the back post from the resultant corner, his volley flicked over the bar, with the next corner again finding Barker in space on the penalty spot but his header glanced wide to leave the 37 year-old seeing two golden chances go begging.

Just before half-time, Oxford earned themselves a free-kick from the edge of the box, with the resulting free-kick being palmed aside brilliantly by a scrambling Purnell to leave Weston fans once again lauding his efforts.

Weston continued to press forward with purpose, and after Jake Lee managed to knock a header through for Brad Ash despite being sandwiched between two players, Ash strode in on goal and his powerful drive was tipped aside by the Oxford No.1.

Bartlett’s Seagulls sealed all three points 14 minutes from time when Scott Davies fouled Grubb inside the box to give away a penalty, with Barnsley loanee Ash confidently dispatching the spot-kick from 12 yards despite the keeper guessing the right way,