The game started at a fast pace from the off, Weston’s midfield utilised Brad Ash’s pace by playing balls around Welling United’s defence constantly, and soon looked like that their tactic had worked; Ash beat the offside trap yet again and raced through on goal but the goalkeeper came sliding out to claim the ball, as he did he seemed to send Ash tumbling over but instead of giving a penalty, the referee chose to book the striker for simulation, much to the dismay and confusion of the Barnsley loanee and everyone around him. 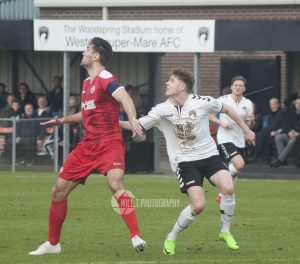 The home side continued to work to find an opening though, Dayle Grubb always looked threatening from the left wing and Lloyd Humphries smashed a shot narrowly wide of the post from the edge of the box. Welling did look threatening on the counter attack, their pace up front was clear and they did have one or two half chances, but Luke Purnell was equal to them. In the 45th minute Brad Ash was once again sent through on goal and as he went to shoot he was clattered into by a Welling defender which stopped him being able to strike the ball, however once again the referee waved all protests away and signalled play on. A minute later a mix up in defence helped the ball to drop to Welling striker Adam Coombes who volleyed past the helpless Purnell and put the visitors 1-0 up in the 47th minute of the first half.

The score at half time was 0-1, but it could be argued that Weston were extremely unlucky throughout the half.

The second half became really lively after the introductions of Jake Lee and Jake Reid who made a huge impact to the Seagull’s forward play. Reid held the ball up superbly and Lee made a nuisance of himself wherever he could, also providing intelligent runs to pull around the away side’s defence.

But once again it was Dayle Grubb to the rescue for Weston. After coming so close to a magnificent goal last week, the writing was on wall when he stepped up to take this free kick from about 25 yards out. He bent an absolutely stunning direct free kick into the top right corner, over the wall and past the stranded goalkeeper in the 62nd minute.

But almost instantly after that Welling regained their lead, Danny Waldren fired the ball past Purnell and into the far corner to put the visitors 1-2 up in the 63rd minute.

But the Seagulls didn’t give up, and in the 72nd minute Grubb played a one-two with Jacob Cane from a short corner, dribbled around the box and lashed a shot into the bottom left corner of the goal, which sent the North Stand into jubilation and caused an enormous roar from the Seagull Army across the ground. Neither side managed to find a winner though, and the points were shared on an exhilarating afternoon at the Woodspring Stadium.

The final score for the match was 2-2. The Seagulls’ next match is at home to Bath City in the Somerset Cup on Tuesday 21st of February.