This Friday evening, in a rearranged fixture due to their pitch not being safe enough to hold the fixture, Southern League Premier side Frome Town will make the journey to Weston, where they will face the Seagulls on their new 3G training pitch, adjacent to the main pitch at the Woodspring.

Weston are currently unbeaten midway through their pre-season preparations, having won twice and drawn once, the draw being an epic display of attacking skill from both sides in a 6 – 6 draw with Forest Green Rovers. After Weston’s convincing 3 – 1 win over a Bristol Rovers development squad on Tuesday, Marc McGregor will be hoping for more of the same from his players as the trialists look to land a contract at the Woodspring. 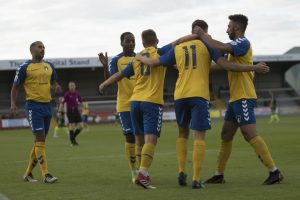 Frome Town FC go into this encounter after promising winger Joe Raynes was snapped up by National League South side Bath City after a successful trial, and the visitors have former Seagulls players Ollie Knowles, Ryan Bath and Sam Teale in their side. Currently throughout pre-season, Frome are also unbeaten, having won both of their games, a 4 – 1 win over Cinderford and a 1- 2 win away to Cwmbran Town, going a goal behind in both games.

The game will be played on Weston’s new 3G training pitch, and entry for all supporters is free.