Happy New Year to all you Seagulls fans! The Under 18s are approaching the half-way point in their season and I take a look at how the team have fared so far, and what is coming up in the long run.

Morale must have been high going into the season. Fresh on the back of winning the League and Cup Double last season, the players that came in had a few months to adjust before the practice came into effect when Autumn approached. Kailan Gould left Weston to play for Yate U18’s in the summer and there was a change in rearguard at the top as Dan Hartley and James Hodgkinson took over as joint managers as well as managing the U12’s. However, the Weston players were brought back down to earth in the FA Youth Cupn 1st Qualifying Round against Taunton Town as they lost 2-1 because of two superb strikes from Cameron Sanford and Jack Hobbs. Jack Hockey scored a consolation goal but it wasen’t to be for the team.

Weston steadily progressed to the Roger Stone Memorial Cup Round of 16 in their first home game of the season as they dismantled Wells City 3-1. The team were still in high spirits despite the cruel loss against Taunton, but Weston had a job to do when Wells took the lead just inside the second half. It looked like being one of those days when Alfie Hardy missed a penalty won by Dan Rosser, but Solomon Wanjau-Smith came to Weston’s equaliser. Glen Hayer gave Weston the lead with an impressive free-kick from half-way and Wanjau-Smith gave Weston the win by calmly slotting home.

The ‘Young Seagulls’ began their League Campaign at the start of the month and again disposed of Wells City at home with the scoreline being 3-1 as Hayer netted his 2nd of the season, with Ash Tandy and substitute Ryan Eardley bagging their 1st goals of the season.

Weston’s fall from grace really began when they took a trip to Yate on the 21st of October and faced up against former player, Kailan Gould. Yate proved to be table-toppers for a reason and Gould, along with the rest of the team, were able to dismantle Weston comfortably to put pressure upon the team.

Weston ended the month with a home tie against Ashton & Backwell, but unfortanately lost 4-2. Weston coulden’t deal with the poaching efforts of strikers Liam Villis and Oaklan Buck, who got 2 apiece, but defender Glen Hayer continued his fine goalscoring form from defence with another 2 goals in the game to take his league tally to 3 and his overall tally for the seaosn up to 4 in all competitions.

Dan Hartley and James Hodgkinson were desperate to quash Weston from falling further down the table and so the pair both took evasive actions for the good of the team. Central-Midfielder Patrick Riddell, Winger Nathaniel Groom and Full-Back Ollie Coombes are all set to try and help pull Weston out of their recent slump in form.

For Patrick, it is familliar surroundings as he rejoins from Weston’s local rivals Clevedon Town whereas for Nathaniel and Ollie, they have had little time to settle in and get used to the style of football Weston play but on the pitch, the pair seem to be adapting well while Patrick has to wait for his ‘second debut’.

The U18’s only played two game in December. The first one came in the Roger Stone Memorial Cup Round of 16 where they faced off against Odd Down, who are currently leading thier divison. Unfortanately, the team suffered a disappointing 3-2 loss to the team from Bath, where goals from Ash Tandy and Matt Trybull were unlcky not to win the game for Weston, when Ben Bradley scored the winner for Odd Down with a few minutes to spare. The final game of 2015 came against Somerset Schools U16’s, coached by Jake Mawford, in which Weston dominated large periods of the game but fell 2-1 where 9 regulars were unavailable due to other comm
itments, and the winning goal came through a dubious penalty decision as bright spark from the U15
s Reece Ferguson made his debut under the guidance of Dan Hartley.

Weston are in for a busy January, with trips to mid-table sides Wells City and Ashton & Backwell, while playing relegation rivals Gillingham Town, derby rivals Clevedon Town and table-toppers Yate Town, who are currently going through a bad run of form.

The U18’s look like being bled into playing the same type of football as the first team, with attacking, possession-based football being moved through the defence, up to the midfield, out to the flanks and then ending with the end product.

However, managers Dan Hartley and James Hodgkinson need to be prepared for the end of the season as Jay Webber-Andrews, Glen Hayer, Harry Clemetson, Alfie Hardy, Patrick Riddell, Daniel Rosser, Adrian Hodgkinson, Matt Trybull and Morgan Ingham all ending their second-year association with the U18’s and most of them may have their hearts set on bigger and brighter things.

Has had an impressive season so far, commanding the defence and also getting upfield and chipping in with 5 goals. Has captained the side on one ocassion this season and looks like he may well be a future professional.

2nd place: Sol Wanjau Smith – Has played well so far this season, chipping in with 2 goals in 7 games. His work-rate and link-up play with players such as Matt Trybull has been superb and his unselfish play continues to get his team-mates chances.

3rd place: Matt Trybull – Continues to be the ‘king of assists’ this season for the U18s. Captained the team in the narrow loss to Somerset Schools U16’s and his calming influence on Reece Ferguson helped him to settle when on
the

Has adapted well to the way Weston have played this season and looks set to have a strong future in the game if he can grab more goals for the team. Loves to spread the ball to the wings but despite not being the tallest player, he likes to win header.

2nd place: Ash Tandy- The player that has been billed as the next player to come through from the academy, is linking up well with various strike partners Sol Wanjau-Smith, Ryan Eardley and Daniel Rosser.

3rd place: Jack Hockey- Jack has been learning from his centre-back partner Glen Hayer about how to command the defence and how to play the ball out of defence. The new U18’s partnership is coming on a treat with these two!

Player Of The Month Awards

September: Matt Trybull and Daniel Rosser – Both players were inseparable during September, with Matt running the midfield with some tenacious tackling and good ball movement whereas Daniel didn’t get on the scoresheet but linked the play between the midfield and the wingers well.

October: Ash Tandy, Ryan Eardley and Glen Hayer – Once again, there were some outstanding displays from individuals and the award was hard to seperate. Ash put in some strong performances, Ryan caused defenders panic when he ran at them with the ball while Glen proved to be comfortable on the ball with some excellent distribution and he also showed his goalscoring credentials by netting 3 goals during the

December: Ash Tandy and Matt Trybull- Both of the players scored in the shock cup loss to Odd Down at the start of December. Matt has been solid when playing in the centre of midfield whereas Ash has terrorised defences with his running and movement on and off the ball in the 2 games played in December. 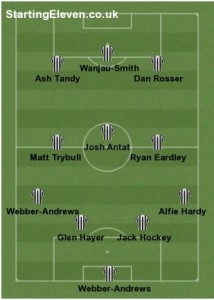