The defending champions have found out that they will face Hengrove Athletic away in the Somerset Premier Cup second round, with the game now being confirmed for Tuesday 4th December 2018.

The game will kick off at the arranged time of 7:30pm, with the stadium address being Paprika Park, BS14 0BT.

Hengrove currently sit 19th in the Western League Premier Division, with three points from their first nine league games and a goal difference of -15. Hengrove’s only league win of the 2018-2019 campaign so far came on the opening day, a 7 – 2 win over bottom side Shortwood United, who have a goal difference of -34. 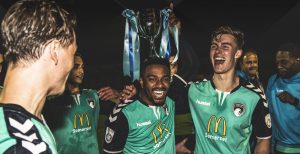 If you want to catch the Seagulls in cup action this season, then make sure that you’re at the Woodspring to witness the Weston vs Bath clash this Saturday in the FA Cup fourth qualifying round, with a place in the first round up for grabs.