Ahead of the Weston U18s match this evening against Bristol Manor Farm, being played at Woodspring Stadium, KO 19:30, we caught up with the teams coach Jake Mawford to talk to him about his sides progress and how he sees the season panning out.

Q Hi Jake, how would you consider your title chances ahead of this evening’s game with Bristol Manor Farm?

A. We are currently third in the table and as such we are not getting too carried away. Both Cullompton & Clevedon are in stronger positions, especially as we still have to face them both away after some tough matches at home. There are no easy games in this division. Virtually every team has caused an upset so we will not allow for complacency. Bristol Manor Farm will be another tough test for the team. It is in Cullompton’s & Clevedons hands so we are looking to simply enjoy our remaining matches, we are concentrating on performances and player development. That is more important to Jon Haile and I than a league title. The club always enjoys seeing youth products represent the first team and we hope for more of this in the future. 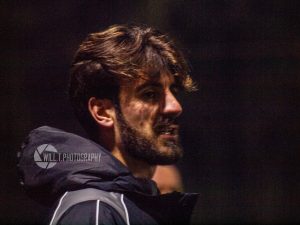 Q. Was a win on Monday against Cullompton of importance to you?

A. It is always nice to win but I was more pleased with the second half performance than anything else. The first half wasn’t great in my opinion. We didn’t move the ball particularly well which is disappointing and we made some immature mistakes. The second half was a different story, when Angus Mason moved to CDM we were a different team. Angus was man of the match and he displayed what it is to be a Weston player in the second half.

Q. What’s the main message you’re trying to get across to the players?

A. To concentrate on performance rather than results. Process over product. I want to see them play our way. A number of our players have picked up valuable experience in the Toolstation and Southern leagues. They need to learn the lessons from men’s football, but I don’t want to see it change them. We play in a specific style and that must always be the foundation of our positive performances.

Q. What now needs to be done to lift the title in your opinion?

A. Like I said Clevedon and Cullompton are in stronger positions so it would be unfair to ask the players to win the league from where we are. One game at a time. Concentrate on our performances and see where it takes us.

Q. Does the title race swing in your favour with away games to Cullompton & Clevedon rounding up your season?

A. Both of those matches will be hard. The conditions will not be what we are used to at the Woodspring Stadium. The referee will have a big part to play too, and he will have to be strong minded. Playing at home is a huge advantage and we are underdogs going into both games. I don’t know if we will even be in a position to win the league by then with two difficult matches at home. If we get to the final two matches with a chance of winning the league we will give it our best try. I am looking forward to the final matches and seeing how our players develop.