Jake Reid’s late substitution appearance for the club on Saturday against Concord Rangers was the last of his career following his decision to retire from the game. Jake has been struggling with niggling injuries this season and has made the decision to hang up his boots. 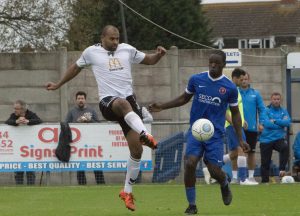 Jake spoke of his decision, “I thoroughly enjoyed my time at Weston, I am genuinely gutted that it has come to a premature end. Unfortunately my body is dictating to me that it is time to call it a day on playing football. 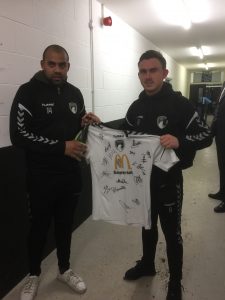 Jake Reid receives a bottle of wine and a signed shirt from Ash Kington after his final match at the Woodspring ©Will.T.Photography

He went on to add, “I’d like to thank all of my team-mates, Marc MrGregor and the rest of the staff and management of the club at the Woodspring, and would also like to extend my thanks to also include the fans for making my time at the club so memorable. I want to wish the best of luck to each and every person at the club for the future.”

Marc McGregor spoke of Jake’s decision to not only leave the club but to leave football.  “Jake Reid has decided to hang up his boots, which I know is a tough decision for anyone to make, I admire him for the honesty in which he did so.

“He has had a great career and his knowledge & support will be missed in our dressing room as well as his poor banter. Jokes aside, we wish him all the best, people like Jake will be back into football in some capacity as he has a lot to offer a club in the future.”

Captain, Jacob Cane, added, “It’s sad to see him leave before the end of the season but we fully understand why he has made the decision. He has been a real character in the dressing room and on the team coach and it was a pleasure to play alongside him. On behalf of myself and all the lads we wish him all the best for the future and hope it’s not the last we see of him in the game.”