Liam Kingston’s loan at Street FC has been extended until February 2nd 2019, whereas George Morris-Edwards will return to the Woodspring on the expiration of his loan on 2nd January 2019.

During his time at Street so far, Kingston has made six appearances whereas Morris-Edwards has appeared three times as a substitute and started once, being an unused substitute on one occasion.

Kingston has conceded seven goals in his six appearances at Street, and Morris-Edwards started the first game at Street against Winchester, completing ninety minutes, and played 45 minutes against Bristol Manor Farm & Evesham United, as well as coming on in the second half against Cirencester Town.

Street are just outside the Southern League South Division One playoffs. 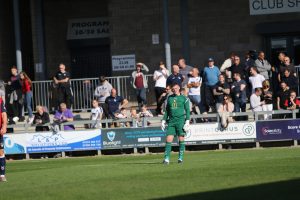 Good luck to Liam during the next month at Street, and we look forward to welcoming George back into the squad.