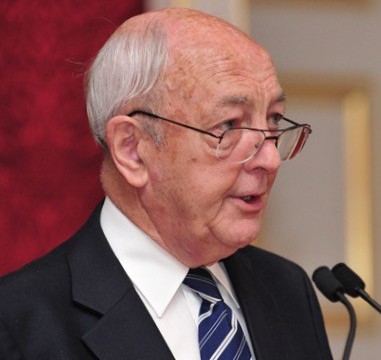 The National League is pleased to join with many in the world of football in receiving and welcoming the news that our President Brian Lee has been awarded the MBE in the New Year Honours List.

Brian who is now 78 years of age has had a distinguished career in football throughout his working life in a variety of roles and it is for his services to the game that he has been formally recognised with this prestigious award.

A promising playing career in his younger days was halted due to injury and so he took up coaching which was to become a major part of his football career. He was the youngest ever FA Staff Coach and he left the National Recreation Centre at Lilleshall, Shropshire to preside over Bisham Abbey, in Buckinghamshire as its Director for more than 20 years.

Brian then became Manager of Wycombe Wanderers FC and during his time with the club went onto to serve the club as its Club Chairman and to oversee and project manage the move from Loakes Park to Adams Park. He also appointed Martin O’Neill as their manager who took the club into the Football League in 1993. Brian’s involvement with the club stretches back over some 38 years and still continues to this day.

He also managed the England semi-professional team and often travels with England C alongside the current manager Paul Fairclough.

Brian became firstly Vice Chairman of the Football Conference in 1991 before taking up a role as a Vice President two years later; prior to his elevation to Chairman in 2007. Over the ensuing eight years he has lead the competition with an assurance and dignity befitting his experience in the game. He stepped down from that position in June this year and was offered and accepted to become President under its new operational name of The National League.

During his time as Chairman he worked tirelessly to enhance the position of the competition in many areas of the game and was often the coolest head around when the emotions of the sport often raised its head. His astute leadership qualities led to him being the founder of the very influential community scheme operating under the flagship of The Football Conference Trust, engaging support from both the Premier League and the Professional Footballers Association in its aims and objectives.

A keen golf enthusiast he would undoubtedly confirm that behind every successful man is an even more astute woman; and many in the game and in particular our own member clubs, will resonate with that saying, for alongside him at a match each week will be his wife Shirley-Ann.

Brian Barwick as Chairman of The National League commented on hearing the news, “Brian has truly been a shining and inspirational light in his service to all of us in the game. Whilst that service has been over many many years we know he has enjoyed every minute. I proudLy join with all my fellow directors, staff and of course our member clubs in paying tribute to a selfless servant, who has been rightly recognised with this honour”.