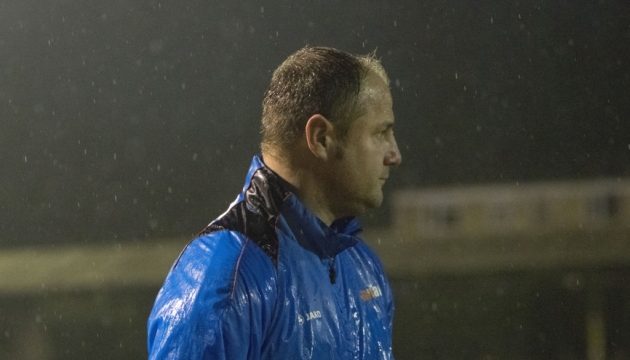 Club reporter Liam Drury spoke to Marc McGregor to get his thoughts on how October had gone, the games against Bath and Torquay as well as looking forward to the games in November.

October hasn’t been the best month for you in terms of the league, but you are through to the FA Cup First Round but still without that first league win. What are your thoughts on the month?
Yeah, I’m disappointed to not have a league win yet but I’m positive that it will change on Saturday. We’ve been playing well  and you look at the Torquay game, that’s what we expect from now on. We don’t expect any performances to drop below there and if they do stay like they performed for the Torquay game, then we’ll soon be out of any trouble that we’re in. There’s a long way to go and it’s only the start of November, still got December and the other months to come so I can see us being in a good position come the New Year. 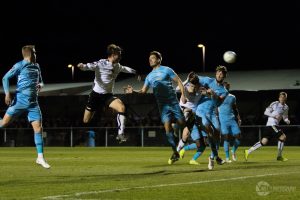 You touched upon Torquay there. In front of 1,000+ crowds against them and Bath, you performed well in both games. Do you believe that the boys need to raise their game no matter how many fans are there?
Yeah, but it always happens. If you’re playing in front of a big crowd, you’ll always get that little percentage to run harder but like anyone else, I don’t think that should be an incentive to stay in the side. If you’re not doing it and you’re not working hard enough, then you won’t stay in the side. But against Torquay, I thought that everyone put in a really good shift so I was really pleased. We’ve talked about that at training on Thursday night, we’ll talk about Hungerford, we’ll just touch on Torquay because we don’t want to linger on it and then we’ll move on because Saturday’s really important for me.

Looking back at your team selection in the past month, you’ve played Jamie Lucas in a winger/inside forward role. What was your thinking behind that?
It’s more when we get the ball out wide then he is more of a centre forward and get him in the box. We have a structure but we also allow them to play with freedom. When players are playing with freedom, they’re difficult to mark, to pick up and people can do thing that in a rigid formation, they’re not allowed to do. People have got to play in positions that they don’t play in, look at Jake Lee. He’s had a man of the match, I think, in every position apart from left-back and goalkeeper. They’re supposed to be footballers, and you can’t always class yourself as an out-and-out centre forward. Sometimes, you have to do a job for the team. 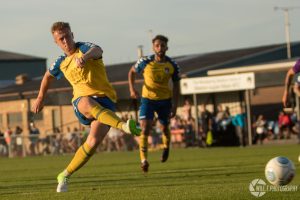 When you play Jamie down the wing, does that mean you limit yourself to going down the opposite side?
No, I don’t limit anything. It’s probably the boys that limit that and probably rightly, you would go out there and get crosses in from Jarrad (Welch) or George Nurse to allow the centre forward whether it be Brad, Geth and Jamie Lucas to get in the box. The more people we get in the box, the more goals we score. We saw that against Torquay where we took chances, we got forward and created opportunities. If it wasn’t for three fantastic saves, we would have got all three points. I expect that now against Hungerford.

In the past month, quite a few goals have come from set pieces, either attacking them or defending them and hitting the opposition on the counter. Is that something you’ve worked on quite a bit?
We always work on set plays, we always have a structure and it’s important that they’re the little fine lines. Back in the World Cup, I think that 25% of goals came from set plays or it may have been slightly more. That’s how important it is, and it can be the difference between winning or losing a game. I was disappointed with the goals that we conceded against Concord so we’ll be working on those things as well. We’ve defended quite well recently and now we need to reward the boys at the back by scoring more goals. 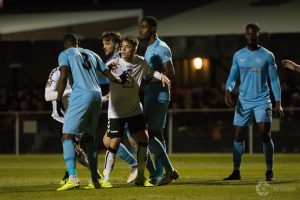 Has Matt Bower been a big influence in defending and attacking set pieces?
Well, being 6’7″ really helps! I think that the partnership he’s formed with Popey (Jason Pope) and the triangle with Luke (Purnell) has been really positive because those three have been some of our best players over the last few weeks.

Luke got MOTM against Coggeshall and Bath in the FA Cup. What does that tell you about how your side performed in them games?
I can see Coggeshall, but I can’t see it against Bath. The saves he made, we’ve already discussed it, are ones that I expect him to save and they weren’t ones that I thought the Torquay keeper made against us. I thought somebody else was MOTM against Bath but that’s the recognition he’s getting at the moment  because when you do make saves, people notice it. But it is his job and against Coggeshall, I thought that he was outstanding but the ones against Bath, I expect him to save. I expect Jamie Lucas to save them as well. 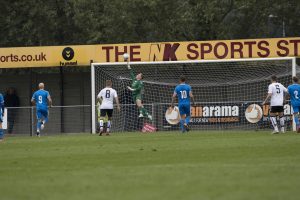 Against Bath, staying on that game, Jarrad’s work rate was phenomenal off the ball. Is that something you expect of him?
I think it’s always been there. What we’ve noticed with Jarrad is that since we bought into sport science and technology into the club, we’ve noticed how hard he does work compared to the other players. He’s right up there on the stats, he works his socks off and people notice his body shape. That’s probably because he’s a young kid and that will change but he works every game, every training session and he gives us 110% so I always know that I’m going to get a workrate out of Jarrad. It’s then just adding the technical side and the little bit of quality that he has going forward.

Just how hard are your players working off the ball?
Different players work in different ways. There’s some players that run all over the place and it’s not intelligent, and some pick up intelligent places to pick up the ball so that they don’t have to run so far. What it is is that you have to have that right blend and mix. I look at how far they’re running. I was at Forest Green Rovers the other day and seeing how far their pros were running so I’m always looking at whether we’re stretching ourselves to league level and at the moment, the lads are. They exceeded it against Torquay and I expect them to exceed it against Hungerford. 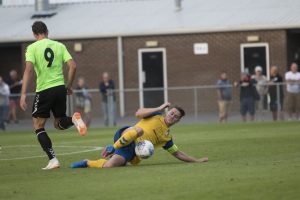 Are you looking to bring that experienced player through the door soon? Is it still a work in progress?
We offered a deal to somebody. It was way below their expectations and they’re not worth paying more for, that’s for sure. There’s one that we’re chatting to at the moment and as a club, we’ll do everything we can to get him in because he’s a fantastic player and he’ll be another great lad for us so hopefully we’ll know in the next 48 hours whether something might happen there but we will continue to look. We’ll look for the right player and someone who is the right mix for the club.

Will the money generated from the FA Cup run help get that player through the door?
It can do. It won’t do any harm and against the likes of Torquay, there was a good crowd size, which was great, it added to the atmosphere, as well as the Bath game. All of those things really help so fingers crossed that it will be the lever that we need.

Looking towards this month, you’ve got Hungerford, Dulwich Hamlet and Welling away in the league. How well do you think you can do in those games?
We go into every game to win it. That’s what we need at the moment. Welling are an outstanding side this year, I’ve had good reports on them and likewise Hungerford and Dulwich will not be any gimmes. We’ll be working as hard as we can but like we saw against Torquay, who I think could actually go and win the league. They’re probably one of the best sides I’ve seen but we can match anybody on our day. If we can come into every game with the same attitude we had on Tuesday night, we’ll be fine.

You’ve also got Wrexham in the FA Cup at the Woodspring. You started your playing career alongside Wrexham manager Sam Ricketts at Oxford. What’s it going to be like going up against a former team-mate in a big game like that?
Yeah, it’ll be good. I’m not looking forward to going up against Sam, I’m looking for my team to go and beat his team. That’s the idea of the game but it’ll be tough. They’re riding high, he’s got them playing really well. They’ll be very well organised, they’ll be fit so we expect a really tough game but it’s a free hit for us, it’s one that we can hopefully go and enjoy and upset them. That’s what the cup’s about.

Wrexham don’t score many goals but don’t concede many either. If Weston get the first goal, do you think that’s going to settle the players in front of possibly 2,000 Weston fans?
Well, let’s hope so. We’ve been more solid recently. It’s got the makings of a great game, we need to make sure that we do our job on Saturday then Tuesday and then we’ll worry about it because for me, the most important games are Hungerford and Dulwich.

The FA Trophy also starts this month. Are you looking for a cup run in that, or are you wanting to concentrate on the league?
Winning breeds habits so if you’re winning games, it becomes a habit. Everything we enter whether it be the Somerset Cup or the FA Cup, we always go and look to win every game we play. That’s no different so if we can get a run in the FA Cup and a run in the FA Trophy and be successful in those, it means that you’re winning games and that habit is something that we need.