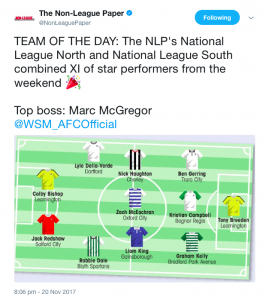 Following the outstanding performance at the weekend that saw the Seagulls knock Braintree from the top of the National League South league table by winning 0 – 1 at the IronmongeryDirect Stadium, and extending Weston’s winning run, the National League Paper named Marc McGregor as this weeks ‘Top Boss’.

Marc commented on his inclusion in the NLP team of the day, “I see this more as a reward for the players rather than for myself. The lads have implemented everything we want as a coaching team, and executed it with perfection.”