The club are extremely proud to bring the news that Seagulls Gaffer Marc McGregor has been awarded the November Vanarama Manager of the Month. Unbeaten in November with some big wins under their belts, including FA Trophy and Somerset Premier Cup wins, Marc has been selected as the top League manager for his guidance of the squad. Having seemingly turned the corner from earlier results in the season and now steadily climbing the league, the results speak for themselves and Macca has been rewarded for the hard work he has put in. 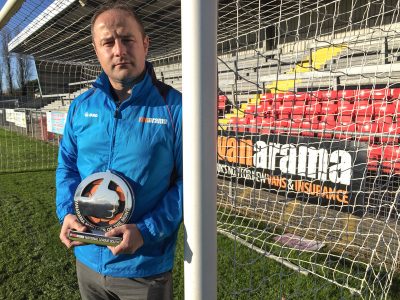 “It’s a great achievement to be recognised and given this award” said Marc when asked for his reaction to the news. He went on to say “I am however, a firm believer that this award is in actual fact more for the squad and the other members of the management team. The team have performed at such a high level and the results have been great. I have to add though, I have been more impressed with the lads work rate off the ball, coupled with the quality and bravery of the players in possession of the ball. They are the guys that deserve the plaudits that go along with this award.”

The Vanarama press release goes on to say ‘during the summer the Seagulls of Weston-super-Mare rang the changes with their Manager and brought in ex-player Marc McGregor. The 39-year-old is yet another young and exciting prospect who after ending his playing career settled into coaching and assistant roles before the Somerset club came calling.

Whilst he would readily admit it did not get off to the best of starts, he has kept to his beliefs and this is now paying dividends.

The club has gone unbeaten in the Vanarama National League South during the month with notable wins away against East Thurrock and Braintree Town, plus a bonus win in the Buildbase FA Trophy also away to Welling United last Saturday.

Not only is the club climbing the table but Marc’s personal stock is rising likewise.’

Seagulls Club Secretary, Richard Sloane, commented on Marc’s recognition, “I have known Marc for a number of years now. He has always been focused and dedicated to the job in his role, whether as player, assistant manager or as manager. He took on this role in pre-season so had little time to create a squad atmosphere. But this he did and despite some early losses his enthusiasm never wavered, and now he is reaping the rewards for that.

He is a great manager, well respected and looked up to by the players and within the club. Well done Marc.”