The right-back or central midfielder joined the Seagulls last summer following a spell with AFC Telford and made 22 appearances before finding himself out of the matchday squad over the past couple of months. 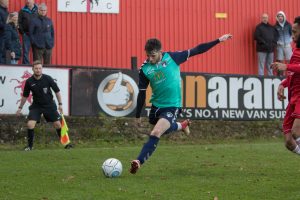 Salisbury are currently third in the Southern League Premier Division and are currently six points off table toppers Taunton Town with a game in hand on the Peacocks.

Weston played Salisbury earlier on in the season, knocking them out of the FA Cup with a replay which went into extra-time, McGrory starting at right-back both times for the Seagulls.

We wish Louis all the best during his time with Salisbury FC.