We are pleased to welcome back Naby Diallo to the Woodspring Stadium. 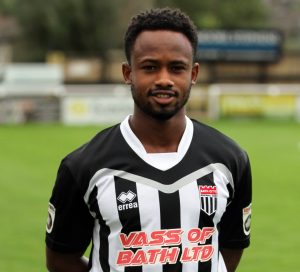 The Moscow-born Guinean began his career in the Bristol City youth academy before continuing his scholarship with Bristol Rovers and making his senior debut for Minehead in September 2009. He also played for a brief time at Gloucester City and Oldland Abbotonians before making a move to Weston-super-Mare in July 2010. He enjoyed four successful seasons with the Seagulls, during which time he also reached the final eleven in the Samsung `Win A Pro Contract` competition which attracted over 5000 applications to earn deals with Leyton Orient and Swindon Town, before a trial with Aldershot Town earned him his first pro-contract in Jul 2014.

He made 12 appearances for the Shots but left in January 2015 and joined City on a non-contract deal. Was part of the City side that reached the FA Trophy semi-final, although he will mostly be remembered for being sent off in the game against Dover Athletic at the quarter-final stage. It was somewhat ironic that he then joined the Kent side in May 2015 but he never secured a first team place and was released in May 2016, returning to Twerton Park a couple of months later.

Midfielder Naby was in his second spell with Bath City having rejoined the club toward the end of the 2016 close season before being released last week.

Marc McGregor, Seagulls Manager said of the signing, “Naby is a great ball-player who can run at defences and will certainly slot in well with the likes of, Mawf, Caney, Kington, Grubby and co. We are very fortunate to have a player of his calibre in the squad. He brings with him such a wealth experience at this level.”

Naby goes straight into the squad for tomorrow’s match at Bognor Regis.